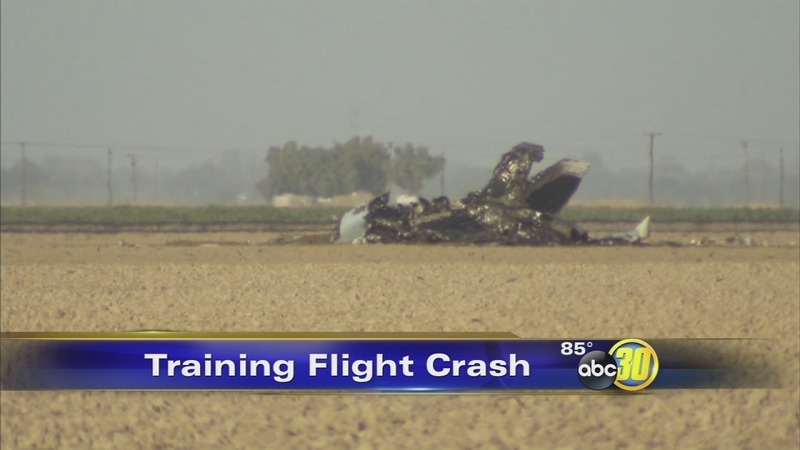 FRESNO, Calif. (KFSN) -- A fighter jet crashed and burned near NAS Lemoore, Monday afternoon. It was a close call for the pilot who managed to eject just in time.

Moments after the F/A-18E Super Hornet hit the ground, a witness captured cell phone video of the fighter jet burning in the middle of a dirt field near Highway 198 and 27th Avenue - a few miles away from a runway on base.

It was a training mission gone wrong according to Captain Monty Ashliman, the commanding officer at the base.

"We could have been seconds away from a tragedy," Captain Ashliman added. "It's definitely a subdued environment but we remain confident in mission capability."

Captain Ashliman says there was only one person on in the jet, a fighter pilot who was in contact with the tower during flight. He ejected in mid-air and parachuted safely to the ground. The multi-million dollar jet, however, didn't survive.

"As far as some salvage, we'll take a look and see but the aircraft is a loss," Captain Ashliman said.

At this point, he can't release the pilot's name or the squadron the jet belonged to. It's too early to say. It's also not clear what caused the crash but investigators are trying to piece it all together.

Captain Ashliman said, "It's certainly, how did this happen? Everything from mechanical to personnel to whatever the mishap cause may be and identifying that."

When the smoke clears, training will continue. Navy officials say there's something to be learned from the crash and the base will ultimately get stronger from it.

Captain Ashliman says the pilot will be able to fly again. He was checked out at the hospital and he's in good condition.


No matter what social media platform you prefer, you can become one of our ABC30 Insiders. Simply include #abc30insider in your tweets, and posts to Facebook and Instagram.