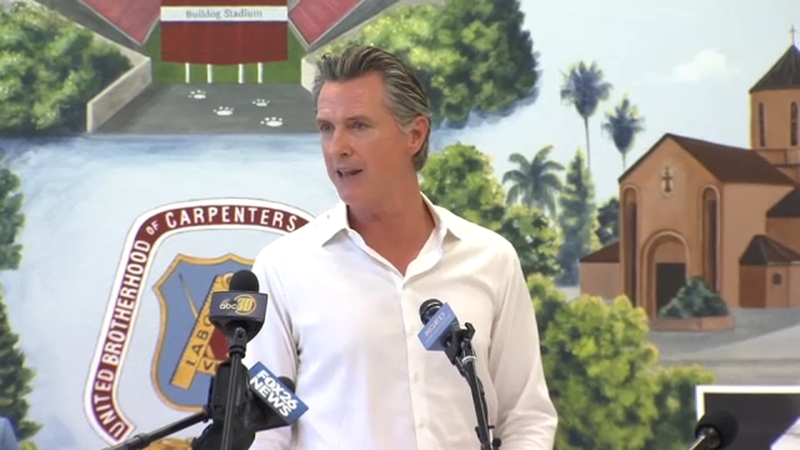 FRESNO, Calif. (KFSN) -- Gov. Gavin Newsom and two of the campaigns trying to unseat him made stops in Fresno Thursday with the last day of the recall election just five days away.

Larry Elder, Rescue California, and the governor all spent part of the day focused on the Central Valley.

"How are we voting on the recall?" Huerta asked the crowd of dozens.

"No," they replied in unison.

In this Fresno stop, Newsom framed himself as the only candidate who will protect the rights of women, immigrants, and workers.

He also criticized the people behind this political challenge.

Newsom called out the recall election's estimated $276 million price tag, but his main focus on the campaign trail now is on Larry Elder, the conservative talk radio host polling well ahead of the pack vying to replace Newsom.

"Larry Elder had the audacity to say women are not as smart as men," the governor said. "They don't know enough in civics, and politics, and economics. Doesn't believe there's a glass ceiling."

While the governor touted investments in the Central Valley, Elder highlighted the rising cost of living and his business-friendly approach.

And Newsom has opponents who don't seem to care who replaces him.

"You want to know why crime is up? More criminals equal more crime," said Mike Reynolds at an event called by Rescue California. "This governor is on a personal crusade to dump violent criminals on our streets."

Reynolds, who is largely responsible for the state's Three Strikes law, joined victim's advocate Marc Klaas and business owners who have struggled because of pandemic restrictions in calling for a "yes" vote without supporting another candidate.

"So get out there," Klaas said. "Vote for the recall. Find your candidate and vote him in. Because I'll tell you this right now, anybody will be a better governor than Gavin Newsom."

The latest polls aggregated on FiveThirtyEight show the recall is likely to fail, but if it doesn't, Elder would be the likely beneficiary.