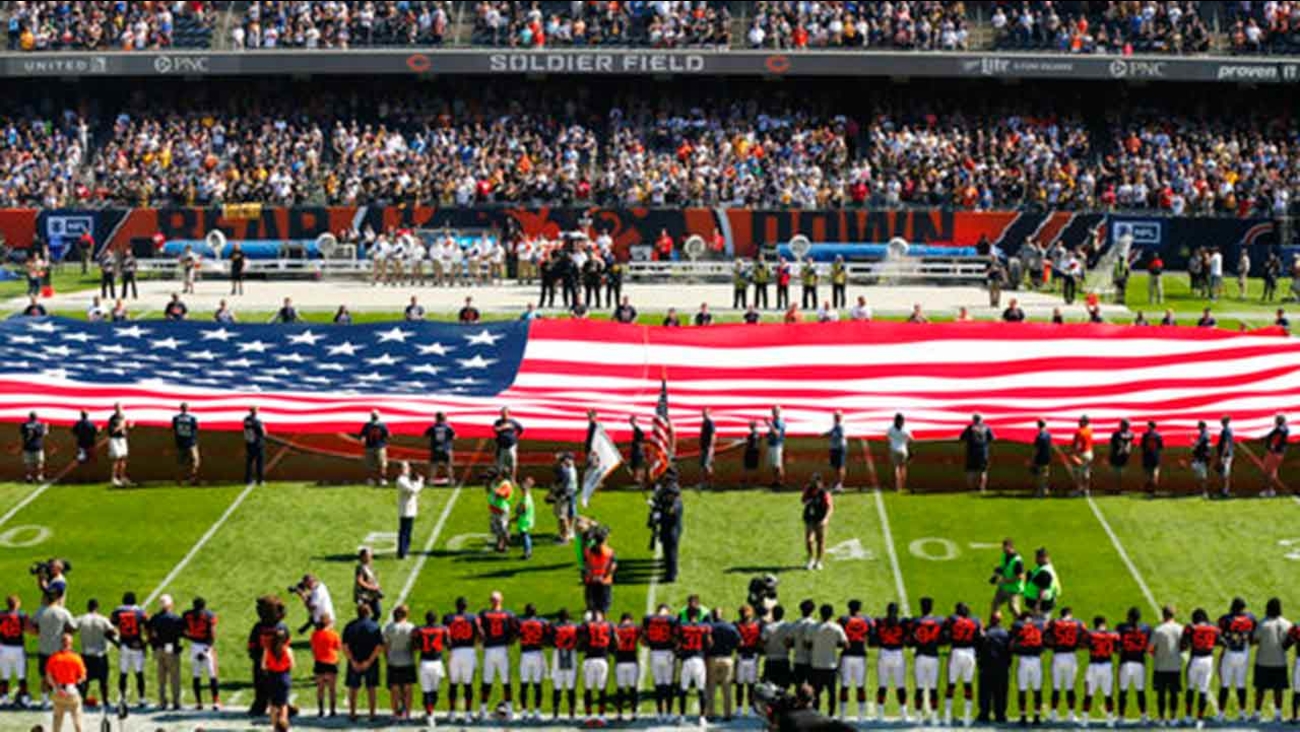 The Pittsburgh Steelers side of the field is nearly empty during the playing of the national anthem as the Chicago Bears lock arms at Soldier Field on September 24, 2017. (AP Photo/Kiichiro Sato)

CHICAGO -- Chicago Bears players locked arms while their opponents, the Pittsburgh Steelers, remained inside Soldier Field during the national anthem Sunday amid President Donald Trump's comments calling for the NFL to fire players who kneel during the anthem.

Chicago Bears Chairman George McCaskey said in a statement, "this divisive political situation has unified our franchise for the present and the future."

Last week across the entire NFL, only four players knelt or sat, and two stood with their fists raised. In the nine early games Sunday, AP reporters counted 102 players kneeling or sitting, and at least three raising their fists.

The reactions reverberated across the Atlantic, where about two dozen players, including Baltimore Ravens linebacker Terrell Suggs and Jacksonville Jaguars running back Leonard Fournette, took a knee during the playing of the national anthem before the start of the teams' game at Wembley Stadium in London.

Other players on both teams and Jaguars owner Shad Khan remained locked arm-in-arm throughout the playing of the national anthem and "God Save The Queen." No players were kneeling during the British anthem.

Former San Francisco 49ers quarterback Colin Kaepernick was the first athlete to refuse to stand during the national anthem as a protest to police treatment of minorities last year. This season, no team has signed him, and some supporters believe NFL owners are avoiding him because of the controversy.

That protest movement ballooned Sunday following Trump's weekend rant that began with him calling for NFL protesters to be fired. It continued Saturday with the president rescinding a White House invitation for the NBA champion Golden State Warriors, who had said they were considering not attending.

By Sunday, it was one of the main topics of conversation on social media and around the country.

In Minneapolis, Tampa Bay Buccaneers Mike Evans and DeSean Jackson knelt with the rest of the team locking arms during the "Star Spangled Banner." The Minnesota Vikings also locked arms. Although no Vikings were spotted taking a knee during the anthem, at least a dozen players sprinted into one end zone and took a knee with head bowed, before the crowd was asked to stand.

Great solidarity for our National Anthem and for our Country. Standing with locked arms is good, kneeling is not acceptable. Bad ratings!

On Sunday, NFL owners continued issuing statements condemning the president's divisive words and players took part in displays of unity across the league.

Sports hasn't been immune from America's deep political rifts, but the president's delving into the NFL protests started by Kaepernick brought new attention.

In a statement released Sunday morning, the Penguins said they respect the office of the president and "the long tradition of championship team visiting the White House." The Penguins were honored by Barack Obama after winning the Stanley Cup in 2016 and previously by George H.W. Bush in the early 1990s.

Wading into thorny issues of race and politics, Trump's comments in a Friday night speech in Huntsville, Alabama, and a series of Saturday tweets drew sharp responses from some of the nation's top athletes, with LeBron James calling the president a "bum." Hours later, Major League Baseball saw its first player take a knee during the national anthem.

"Wouldn't you love to see one of these NFL owners, when somebody disrespects our flag, you'd say, 'Get that son of a bitch off the field right now. Out! He's fired,'" Trump said to loud applause Friday night at a rally in Huntsville, Alabama, comments he kept echoing over the next two days.

"If NFL fans refuse to go to games until players stop disrespecting our Flag & Country, you will see change take place fast. Fire or suspend!" the president said in a Sunday morning tweet.

Trump also mocked the league's crackdown on illegal hits, suggesting the league had softened because of its safety initiatives, which stem from an increased awareness of the devastating effects of repeated hits to the head.

The league and its players, often at odds, have been united in condemning the president's criticisms, with commissioner Roger Goodell saying Saturday that "divisive comments like these demonstrate an unfortunate lack of respect for the NFL, our great game and all of our players, and a failure to understand the overwhelming force for good our clubs and players represent in our communities.

Treasury Secretary Steven Mnuchin defended Trump's attacks Sunday, saying on ABC's "This Week" that the president thinks "owners should have a rule that players should have to stand in respect for the national anthem." Mnuchin added that "they can do free speech on their own time."

New England Patriots owner Robert Kraft, who's been a strong supporter of the president, expressed "deep disappointment" with Trump on Sunday.