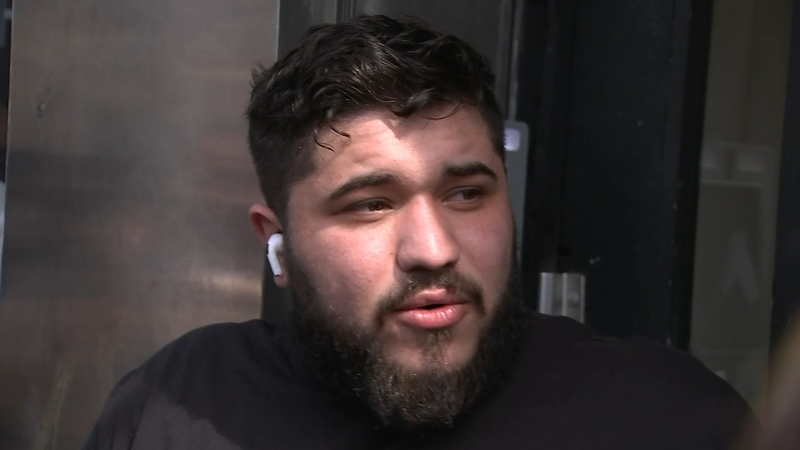 NEW YORK -- The man who identified alleged Brooklyn subway shooter Frank R. James on the street and alerted police officers of his presence is speaking out.

Zack Tahhan said James was casually walking down the street among unsuspecting New Yorkers in the East Village Wednesday.

"I see him, he have bag and he was walking on the sidewalk, he put the bag in the street," Tahhan said. "People was walking behind him. I told them, 'Guys, keep far from him. Please, this guy is going to do something.' These people think that I am crazy. Nobody tries to believe me. I told them, 'Guys, trust me, this is the guy.' And I see the police walking from over there. I told the police, 'This is the guy, he did the problem in Brooklyn, this guy, catch him, guys, catch him.' And they catch him, thank God, we catch him."

Zack Tahhan said the suspect, Frank R. James, was casually walking down the street among unsuspecting New Yorkers in the East Village Wednesday.

It's the eyes and instincts of New Yorkers, ingrained with "If you see something, say something," that helped get the fugitive into custody.

Tahhan followed his gut and flagged down police officers who were patrolling in the area of St. Marks Place and First Avenue.


Cell phone video shows James, wearing a blue shirt and a black baseball cap, calmly being walked to the squad car in handcuffs. Eyewitnesses say there was no incident as officers initially approached.

There had been a citywide manhunt since Tuesday morning after police say James opened fire into a crowded subway in Sunset Park during the height of rush hour.

Since then, police had received several tips on sightings of the 62-year-old, but it was Wednesday afternoon when Tahhan, who was working on surveillance video at a business in the area, spotted him.

Tahhan said the shooting in the subway had terrified him over the past day, and he knew in an instant he was looking at the man for whom police were searching.

"I cannot breathe, I cannot sleep too," he said. "I want to try to work, I cannot because this guy, he put me in trouble when he...maybe (the victims) have kids, maybe have family."

James was taken into custody without incident and will face federal charges that could land him in prison for the rest of his life.

A subway shooting on the N Train in Sunset Park, Brooklyn that left dozens injured has heightened fears amongst riders about transit safety. Marcus Solis has the story.