KFSN
By Gilbert Magallon and Shayla Girardin
EDITOR'S NOTE: In the initial version of this story, ABC30 reported the suspect got of the vehicle with his hands up, and officers shot him after he raised his weapon at them. That was incorrect. According to investigators, the suspect never exited the vehicle, and as officers approached, he raised his weapon at them. That's when officers opened fire. We regret the error in our initial report.

FRESNO, Calif. -- The 55-year-old who is dead after an officer-involved shooting in southeast Fresno on Sunday night has been identified as Gerald Johnson.

Fresno police say the incident started just before 7:30 pm at a home on Gilbert near Callisch.
Officers say one of several family members inside the home called police to say another family member may have been high on PCP and threatening people in the house.

Officials say Johnson threatened one person with a shovel.

Officers arrived to learn that Johnson may have had a weapon.

Johnson soon made his way outside to an abandoned vehicle, where he barricaded himself.

Officers tried to talk him out of the car for a couple of hours.

Police say Johnson was holding what appeared to be a gun when officers approached. They say he raised his weapon, and three officers fired at the suspect.

"When the person was not responding to the officers, officers approached, saw the man raise his weapon, and three officers discharged their firearms fearing for their life," said Deputy Chief Michael Reid.

Johnson was taken to Community Regional Medical Center, where he later died.

Police have not said what type of firearm he had but did say the model appears to be similar to a BB gun or pellet gun. Further investigation is pending.

It's not clear how many shots were fired by the three officers.

The officers have been placed on paid administrative leave as part of the investigation.

Investigators are looking at body camera footage and interviewing witnesses. 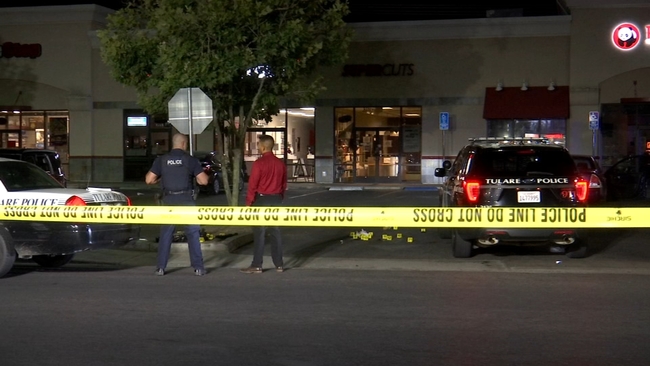