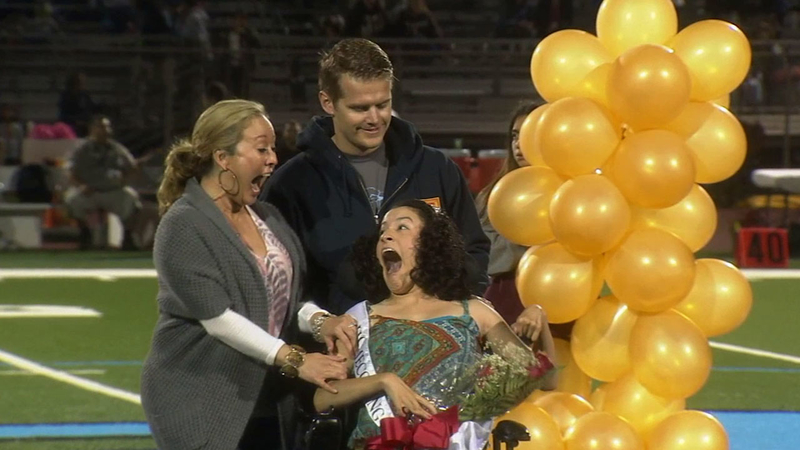 MONTCLAIR, Calif. -- Despite being in a wheelchair, Melissa Andrade campaigned to be a part of her high school's homecoming court. Her ultimate dream was to be crowned homecoming queen.

Thursday was homecoming night for Ontario High School. Andrade was the high school's first special needs student ever to be a member of the homecoming court.

"It's finally here and I'm just very excited," she said.

Andrade has cerebral palsy. Her mom says it hasn't always been easy.

"She's gone through a lot and she's a terrific kid," said Michelle O'Hanian, Andrade's mother. "No matter what, from little kids staring at her, I've always told her, a smile is contagious."

In that spirit, Andrade ran an aggressive campaign for the court. She did so to inspire other kids in wheelchairs everywhere.

"Always keep their head up no matter what," Andrade said.

One of the members of the football team, who has a cousin in a wheelchair, decided that he wanted to help with Andrade's campaign.

Jason Lara asked her to "roll with him to homecoming" in front of the entire school.

"When I saw her smile, I actually felt like crying because it felt good to me," Lara said.

"That was crazy. I loved it," Andrade said of Lara's invitation.

Andrade was nervous about the impending announcement of who would be named queen.

"If I win, I would be like the happiest girl in the world," Andrade said, before the news was revealed.

"This year's homecoming queen is Melissa Andrade!" the announcer said. Her smile grew bigger than ever.

The football team applauded their new monarch, with Lara coming in for a hug.

Andrade says after graduation she wants to teach kids with disabilities.

Thursday night, however, was all about the celebration.

"I'm so happy. I can't thank everyone enough," Andrade said.

All hail the queen!