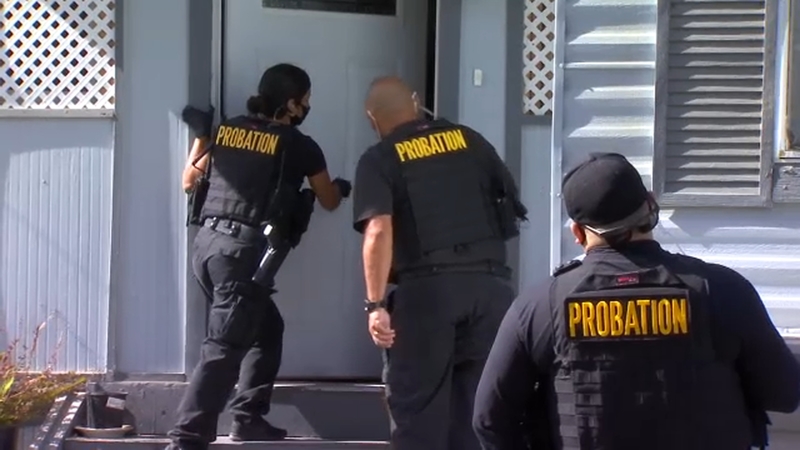 FRESNO COUNTY, Calif. (KFSN) -- Dozens of probation officers crisscrossed western Fresno County Monday to make sure neighborhoods stay safe and to check up on their cases -- including some who haven't been contacted in more than a year.

"So, Alexa Ramos is on for 211 and 187," said a probation officer giving a heads-up while debriefing her fellow officers.

They're about to check in Alexa Ramos, a Firebaugh woman who was convicted of robbery after being charged with murder.

Ramos is accused of using the internet to lure Tyrell Truss for a romantic meeting that was actually a robbery setup.

The robbery ended with a man shooting Truss to death.

Ramos pleaded guilty to robbery, but she's out of custody while she waits for trials against her alleged accomplices.

She's one of about 600 people monitored by probation officers while on pretrial release.

"Our probationers are usually on for a variety of conditions, so it could be burglary, auto theft, drugs," said probation supervisor Manuel Silva.

Action News rode along with officers from Firebaugh to Mendota to Kerman.

"We haven't seen them for a year because of COVID," Silva said. "So for the most part, they're making contact with our probationers again."

Fresno County has about 12,000 people on probation.

For the most part, officers found people complying with their probation rules, as Ramos was.

But they also arrested a few people for probation violations and seized both drugs and weapons.

They've seen plenty of those over 18 years of conducting Operation Safe Streets.

But this year, they're also focused on a billion dollar scam run out of the state's prisons and jails.

"With EDD fraud on the forefront, we're looking for correspondence that may be from the state that doesn't belong to them and certain types of credit cards," Silva said.