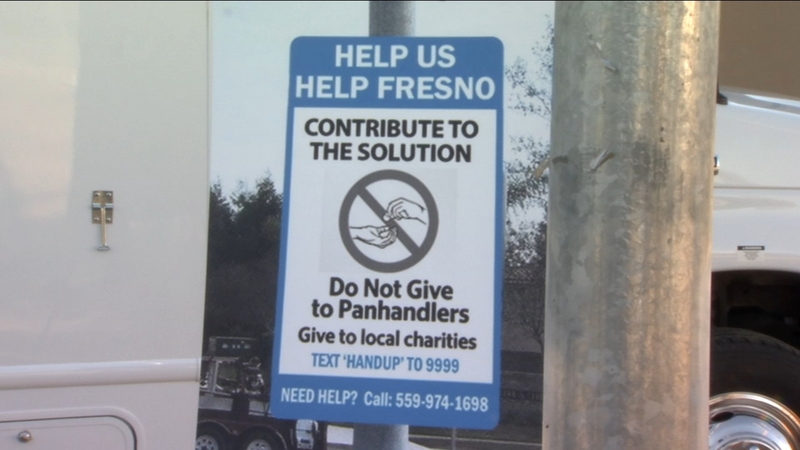 FRESNO, Calif. (KFSN) -- It looked like a rare show of unity between Fresno City Council members Garry Bredefeld from north Fresno and Miguel Arias from the south part of town.

Both agreed to put up signs discouraging residents from giving money to panhandlers and instead, advising them to donate to charities that help the homeless. But when it came to a vote, Arias balked and Bredefeld called foul.

Even though this week the two supported the $20,000 proposal, when it went before the city council on Thursday, it was not well received by homeless advocates.

Other city council members suggested the signs could perhaps be offered in different languages, and perhaps different styles.

After some discussion, council member Miguel Arias backed off his support.

"I think it's just best if we spend another week or two trying to figure out a more unifying message," he said.

That appeared to anger Bredefeld.

"You've not been in favor of this, you have been disingenuous from the get-go," Bredefeld said.

"Miguel Arias is a fraud. I mean, he supported this, he went before the editorial board, we had a press conference, he worked with me, councilman Caprioglio, the police chief Jerry Dyer for two weeks, he supported this and ultimately basically pandered to the homeless advocates," Bredefeld said.

Arias responded that he changed his mind, based on what he heard at the meeting.

"When council colleagues and the public make reasonable requests, we as elected officials are hired to adjust our proposals and ideas to meet those requests. It can't be my way or the highway."

Bredefeld responded:
"Please. He is fraudulent, this is a guy who is involved in class warfare, identity politics, being divisive."

Arias said:
"At the end of the day, Garry in my view is like Donald Trump. They say a lot of things, they mean very little."