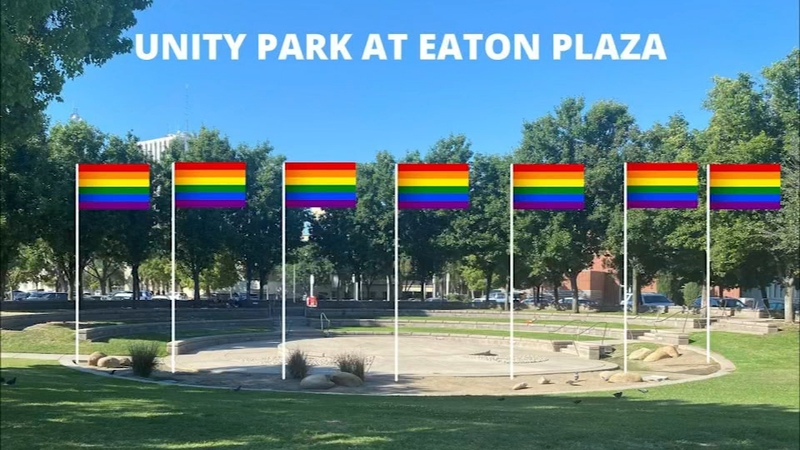 FRESNO, Calif. (KFSN) -- Fresno Mayor Jerry Dyer proposed Thursday that Eaton Plaza in downtown Fresno become the city's freedom of speech area known as "Unity Park" that would have flag poles with the first flag to fly in the new space being the Pride flag.

Instead, he suggested the city installs flag poles at an open area nearby.

This conversation has been centered around the LGBTQ+ Pride flag, but Mayor Dyer says the proposed changes are not specific to any individual groups.

"After much consultation with community members and staff. I feel compelled to offer what I believe to be a reasonable solution," said Dyer.

.@MayorJerryDyer says he’s been reflecting on the council’s decision. He says he feels compelled to come up with a “reasonable solution.” He says this is not aimed at any particular group, including the LGBTQ community. @ABC30 pic.twitter.com/vj1BrPgSwI

Dyer announced a proposal Thursday for a designated free-speech area in downtown Fresno instead of the Flag Raising Resolution passed by the city council last week.

Instead of flying a flag outside of City Hall, Dyer suggested seven flag poles be installed at Eaton Plaza near Mariposa and N Streets.

He said he'd like the area to be known as Unity Park.

"That is my alternative solution to what I think to be something that, instead of being divisive, can be unifying," said Dyer.

City officials said the estimated cost to create and install the flag poles is around $15,000.

Dyer said Unity Park will allow all flags, including religious flags, to be raised, unlike the Flag Raising Resolution.

Organizations would have to apply through the city to raise a flag. Dyer said it was unclear if there would be an application fee for organizations, but said, if there is, it would be 'minimal'.

The city is still trying to determine which flags will not be allowed to fly and is working with the city attorney's office.

If approved, the flagpoles will be in by June 11 and the first flags raised would be LGBTQ flags. Dyer said those flags would stay up throughout the month of June.

.@MayorJerryDyer is proposing Eaton Plaza become the city’s freedom of speech area. He says the area has a stage, seating, and lots of parking. He has ordered flag poles to be put in. The first flag to fly at “Unity Park at Eaton Plaza” will be the Pride Flag. @ABC30 pic.twitter.com/3ipSd8e1Fq

Councilmembers Garry Bredefeld and Mike Karbassi stood in support of the mayor's proposal.

"In Unity Park, everybody will be able to raise their flag for whatever they believe whether you're a faith based person, or is the Pride flag or Black Lives Matter or Support Blue. That's what freedom is," Karbassi said.

Councilmember Tyler Maxwell, who voted in support of the Flag Raising Resolution, said he's surprised by the controversy because many other flags have flown in front of City Hall.

"I think it makes a lot of sense to have a designated free speech area here in the City of Fresno, but let me make one thing very clear, and that is that the LGBTQ+ flag will fly from those flag poles outside of City Hall," Maxwell said.

"City Hall is the people's building and the LGBTQ community are part of Fresno," said Soria.

Dyer would not say Thursday if he planned to veto the Flag Raising Resolution.

He has until June 11to do so, if he chooses.