VIDEO: Woman fights off robber armed with knife at business in SoCal 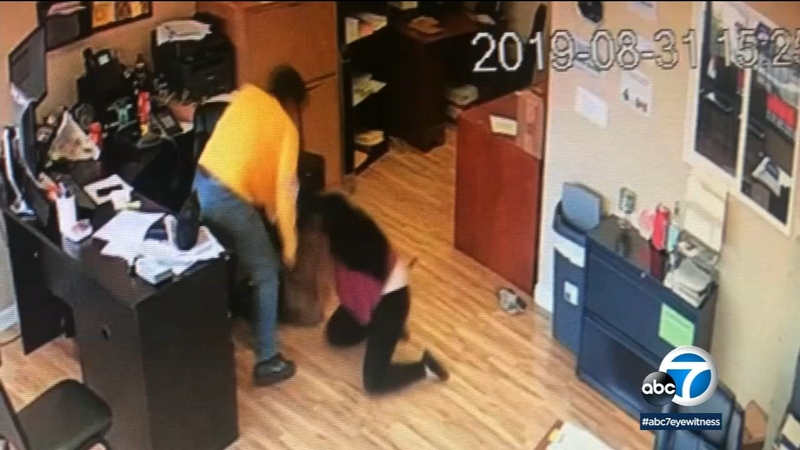 VIDEO: Woman fights off robber armed with a knife at Pomona business

POMONA, Calif. -- A violent struggle between a Pomona store clerk and a robber armed with a knife was caught on surveillance video.

The man got away with hundreds of dollars in cash, but because of the victim's fiery response, it wasn't as easy as perhaps he thought it would be.

"I mean I am a little more aggressive than your average girl, I've always known that," laughed Concepscion Escalante, who works at a registration and insurance business on S. Garey Avenue in Pomona. "But he was a lot stronger than I thought."

The incident happened Saturday afternoon around 3:24 p.m. The man had originally entered the store about 20 minutes prior to the incident, asking about information to get his car registered.
Escalante said he appeared pleasant.

"He was actually so nice. Just smiling," she said.

Escalante said the man left the store because he told her he didn't have his license, but said he would be back later. When he did return, she said he had a completely different attitude.

"I knew right away he was angry," said Escalante. "He came in so fast, he practically ran in."

She said when the robber pulled out a large knife, her only instinct was to fight back.

"I know I punched him in his private area first. I tried to take away the knife, but he grabbed my hair," Escalante said. "My fingers were trying to go into his eyes, but he was just pushing my head downward."

The struggle lasted for nearly a minute. It ended when the man grabbed some cash off the store floor and ran out of the front door.

Escalante said employees at a nearby pizza business ran over to help. One of them called 911. Although Pomona police arrived in less than five minutes, the armed robber was able to get away.

But Escalante hopes someone recognizes his image that was caught on store surveillance video.

"Somebody has to know him," said Escalante, who described him as skinny, and possibly in his mid-50s. "He looked healthy; he looked clean; he didn't look like he was on drugs or anything."

As for her reaction to fight back, Escalante said she doesn't recommend others follow suit.