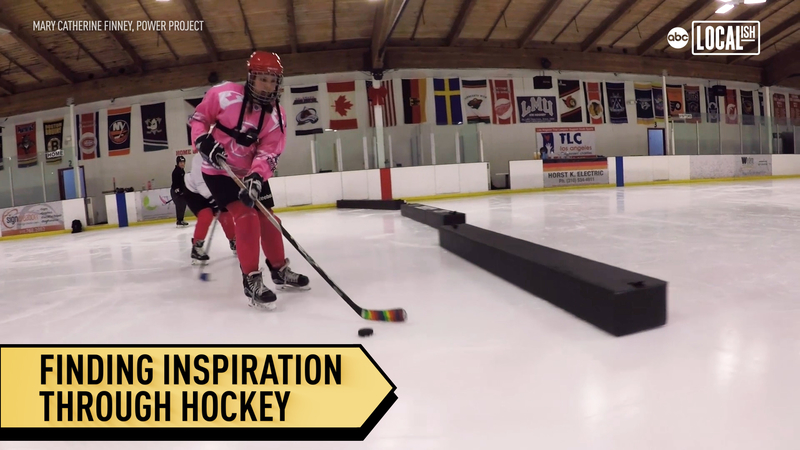 Lameka Bell of the Hawthorne Police Department decided to Google Black professional hockey players one day in 2013 and what she found, or lack thereof, surprised her.

"When I did that, it was just question marks," Bell said. "And I was like, 'Well, what is Google broken? Or what happened?"

That's when Bell decided to start the Power Project, a program to mentor young girls, ages eight to 14, while also introducing them to the sport of ice hockey, a sport that she says is non-traditional to her surrounding community.

"We contacted everybody in our police department who was familiar with hockey," Bell said. "And they became volunteer coaches and before you know it, the Power Project was born. "

Head coach Estela Rivas-Bryant said she sees the impact that the Power Project has had on the athletes.

"I think a program like Power Project is really important for these young women because they need to see that they can attain anything," Rivas-Bryant said. "They need to see examples."

The NHLPA Goals & Dreams program donated about $20,000 worth of gear this year to the Power Project to make sure the girls are suited and ready for the ice.

"I think it's an extremely important project to get the young kids involved at a really young age," Evans said. "That's when the kids have their greatest ability to be able to learn."

Along with teaching the girls hockey, the Power Project also offers the young girls life-skills tips, opportunities for various field trips and volunteer speakers come in to meet with the girls.

"The Power Project is really about collaborating with partners in the community, using some of those resources, and helping our disadvantaged young people," said Hawthorne police lieutenant Robbie Williams.

"We're bridging the gap between the police department and the community," said Hawthorne police officer and volunteer coach Vincent Arias. "They see that different side of us, the more personable side."

10-year-old Amani Anderson said Power Project has been an important tool in some of the teammate's lives.

"One of the girls was saying that she likes how she can get out more and she can play hockey instead of feeling like she's home all alone, just doing nothing and she likes that she can meet new people or new friends," Anderson said. "And I like how I get to learn a new skill."
Report a correction or typo
Related topics:
hawthornekabcall goodlocalish
LOCALISH
Artist's larger-than-life pieces offer intimate view of Black culture
Watch 'ShopLocalish: Holiday Deals and Steals' with Tory Johnson
7-year-old Chicago boy lands first role
Home goods and decor holiday gift guide
TOP STORIES
4 people killed after small plane crashes near Visalia airport
Medical staff dance on Clovis sidewalk to honor 'Dancing Doctor'
31-year-old Clovis High teacher accused of having sex with a child
Shocking video shows small child stealing package from Fresno home
CNN fires Chris Cuomo following suspension, investigation
82-year-old woman killed in Tulare crash
Parents charged in school shooting arrested, plead not guilty
Show More
Homeowners burn down house in attempt to get rid of snakes
How unusual to charge parents in school shooting? EXPLAINED
Money found inside megachurch walls possibly tied to 2014 theft
1 killed, 3 injured in Fresno County crash
CDC warns of increase in flu cases at college campuses
More TOP STORIES News