Trump supporters clash with counter-protesters during rally in Sacramento 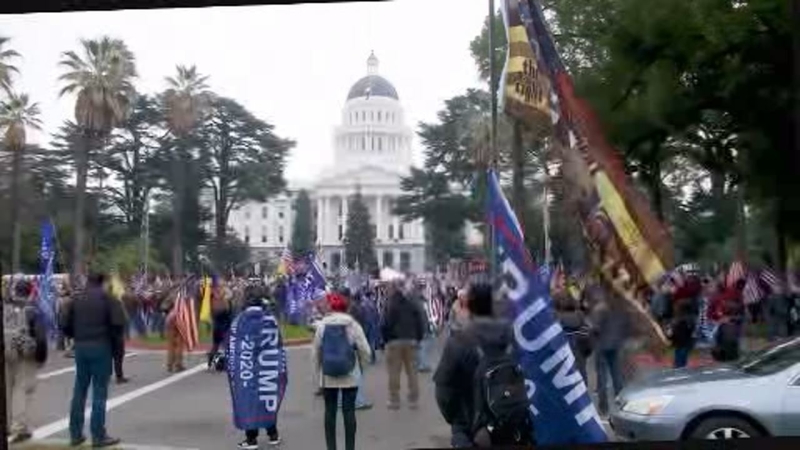 Clashes during Trump rally in Sacramento

SACRAMENTO, Calif. -- Trump supporters rallied at the state capitol in Sacramento on Wednesday. The rally included several fringe groups -- the Proud Boys, the 3-Percenters, and some self-described militias.

About 1,000 Trump supporters started the rally at the state capital by listening to the president's speech. While criticizing democrats, President Trump said, "They've used the pandemic as a way of defrauding the people in a proper election."

Manuel, a Trump supporter at Wednesday's rally, told our sister station KGO-TV, "We know our votes were stolen even here in California."

He and many others support the president effort to fight the election results, despite the president's clear loss. They don't believe tensions will ease after President-elect Joe Biden's inauguration.

Chaos and violence: Social media videos capture clashes between Pro-Trump supporters and police on the frontlines of the U.S Capitol.

T. Fox, a Trump supporter from Elderwood, said, "I am going to fight on because I do believe wholeheartedly, I'm not one of those who's going to turn my head and walk away from facts."

The tensions inevitably rose, arguing and skirmishes broke out. Proud Boys followed counter-protestors away, and at one point, police surrounded the anti-fascists and pepper sprayed them.

Sacramento police tried a different tactic than during the past weeks of protest. They detained people from both sides, and confiscated cans of bear mace and pepper spray.

No one tried to break through the barricades and enter the state capitol.

I witnessed the clashes at the Trump rally at our state capitol. No one tried to breach the barricades and go into the building, but several fringe groups attended. https://t.co/yNgXgcj1ty pic.twitter.com/R2UXHK8bCu