Mother, daughter to graduate together from Saint Augustine's University 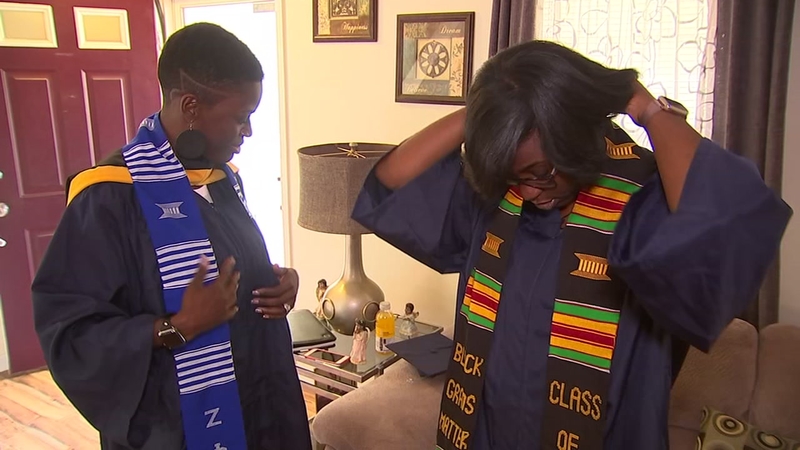 Mother and daughter graduate together from St. Augustine's University

RALEIGH, N.C. -- Alisha Andrews wears a big smile while talking about her daughter's graduation from college.

"I'm extremely proud of her, to make such a big accomplishment. Not that she hasn't before because she did finish high school a year early," Andrews said.

"In elementary school, I had a teacher who told me I'd never be anything, I'd never graduate from college. So to do it and show that I did it, it's very exciting," Long-Whitley said.

While many mothers will be enjoying Mother's Day weekend by smiling up at their children walking across a stage in a cap and gown, Andrews will get an even closer view than most.

That's because she will also be up on the stage accepting a degree of her own.

It’s a special Commencement and #MothersDay weekend for this mom and daughter, graduating college on the same day! Watch for their story, on @ABC11_WTVD ! pic.twitter.com/dutpRSh82T

Both mother and daughter are ready to walk across the stage Saturday at Saint Augustine's University, where they'll accept their degrees on the same day. It's a day Andrews has worked for since the birth of her daughter, who came before Andrews had finished high school.

"Forensic science is what I've always wanted to do," Andrews said.

After the pair accept their undergraduate degrees from Saint Augustine's University, their paths will separate for a while.

Andrews is headed to NC State to pursue graduate studies in psychology related to the criminal justice system.

Long-Whitley is headed out of state, all the way to Texas to continue her education in the field of forensic science.

"Taking a risk by moving that far, but my grandma's in Vegas, so she's not too far!"