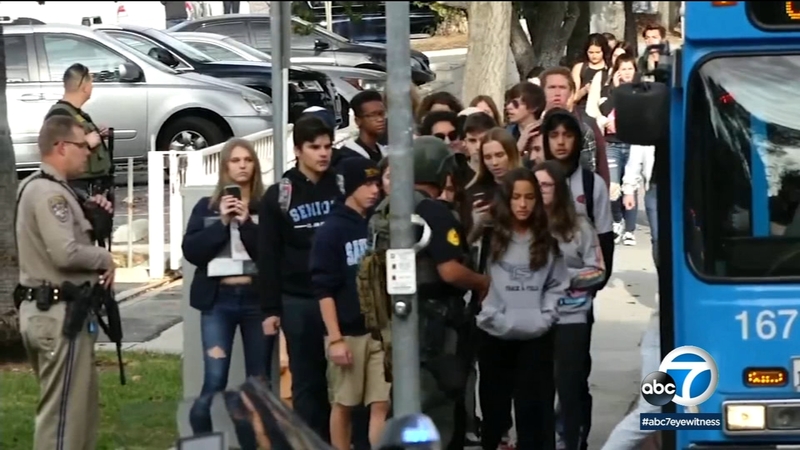 Teen shoots 5 students, self at high school in Santa Clarita

The suspect, who turned 16 on Thursday, was hospitalized in grave condition.

The whole shooting took just 16 seconds. Moments after the shots rang out, the first responders on the scene were three off-duty law enforcement personnel who had just dropped their own children off at the school.

They saw children fleeing campus and immediately went inside to find out what was happening and see if they could help, according to Los Angeles County Sheriff Alex Villanueva.

Six students, including the gunman, were found in the quad area suffering from gunshot wounds, Villanueva said.

The first off-duty officer to arrive at the quad saw the .45 caliber semi-automatic gun at the scene and determined it was safe enough to begin providing first-aid.

"Their actions definitely saved lives and my hats off to them," Villanueva said.

The school resource deputy was also on the scene moments later, he said.

All six students were transported to hospitals, where two of them, a 16-year-old girl and a 14-year-old boy, were later pronounced dead.

A seventh person was also transported to a hospital for a medical issue or injury that was not caused directly by the gunfire.

The surviving victims were described as two girls, ages 14 and 15 and a boy, 14. The boy was released from Henry Mayo Hospital.

Mayo hospital said it had received four patients. Their names have not been disclosed.

The sheriff said the deceased girl's parents were at the hospital. He was notified of the second fatality during a press conference at the school.

About two hours later, authorities said to media that a third victim had died. However, they later clarified that was not the case, adding that all surviving victims were in stable condition.

In the middle of a news conference, Los Angeles County Sheriff Alex Villanueva was notified that a second Saugus High School student, a 14-year-old boy, had died.

According to sheriff's Capt. Kent Wegener, surveillance video "clearly" shows the suspect pulling a semi-automatic handgun out of his backpack in the quad and shooting five classmates before shooting himself in the head.

The shooting just before class started for the day turned an otherwise normal school day into a chaotic, distressing scene. Some students fled the campus, while others sheltered in place, piling up chairs and furniture to block doors inside classrooms.

"It was just a normal Thursday," said student Lauren Farmer. "We woke up in the morning, we got ready. Our biggest problem was about the dance on Saturday and whether you forgot to do homework or not."

"And then all of a sudden it's life or death, within a matter of minutes."
In the immediate aftermath of the shooting, authorities released a description of the suspect as a manhunt got underway. Heavily armed deputies and an armored SWAT vehicle were seen at a home near the school. Investigators confirmed the gunman lived at the house, which was being searched for evidence.

The high school remained on lockdown for hours after the incident. Shortly before 11 a.m., lockdowns were lifted at all campuses in the district, as well as Rosedell and Highland elementary schools.

Central Park, at 27150 Bouquet Canyon Road, was being used as a reunification point for parents and students, the Sheriff's Department said.

Undersheriff Tim Murakami tweeted an apology to parents for delaying the release of their children, saying investigators need to interview "every student at Saugus HS" before they can be released.

All Hart District Schools will be closed on Friday, district officials said.

Counselors were being made available to the school community Thursday 5 p.m. to 7 p.m. at the Santa Clarita Activities Center, at 20880 Centre Pointe Parkway, and Friday from 8:00 a.m. to 4:00 p.m. at Grace Baptist Church located at 22833 Copper Hill Drive.

In a statement, the White House said President Donald Trump was monitoring ongoing reports about the shooting.
"The White House encourages all those in the area to follow the advice of local law enforcement and first responders," the statement said.

Gov. Gavin Newsom tweeted an expression of gratitude to the emergency responders.

"We simply should not have to fear for our kids' lives when we drop them off at school," the governor said. Addressing Senate Majority Leader Mitch McConnell, Newsom asked: "How many more lives will be lost? How many more shootings will we have to endure? We need commonsense gun reform. NOW."

Amid the chaos at the scene, the number of reported victims fluctuated throughout the morning. The sheriff later confirmed that six people were shot, including the gunman.