'The minute you're asked to get a gift card, it's almost 100% guaranteed to be a scam.'
KFSN
By Dale Yurong 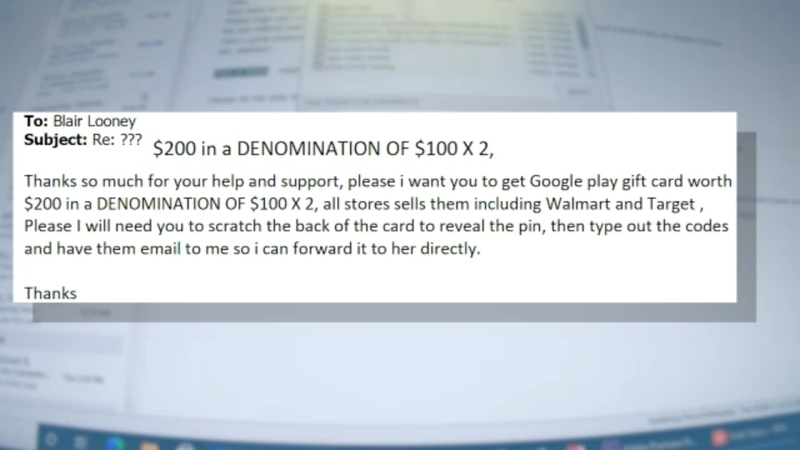 FRESNO, Calif. (KFSN) -- Better Business Bureau CEO Blair Looney received an email from a friend's account on Tuesday asking if he could send something over.

The email indicated he would be reimbursed.

Looney is the President and CEO of the Better Business Bureau serving Central California and Inland Empire Counties.

He called his friend to let her know her account had been hacked.

But he continued to play along. The scammers then asked for the PINs on the back of the card. Looney sent back random numbers.

"They told me it was a problem with those numbers and could I, they used the word 'snap' to take a picture of the back of the Google Play gift cards," he says.

Looney says you never want to send photos to scammers because they may be able to geo-track your phone's location. The emails ended at that point.

"Why has the use of gift cards become so prevalent among scammers? Well gift cards have become so popular because they're almost impossible to trace back," he says.

"It's not like a credit card where you have the security of your bank."

Looney says consumers need to be extra cautious whenever they receive an email or phone call asking them to use a gift card or credit card to pay for something.