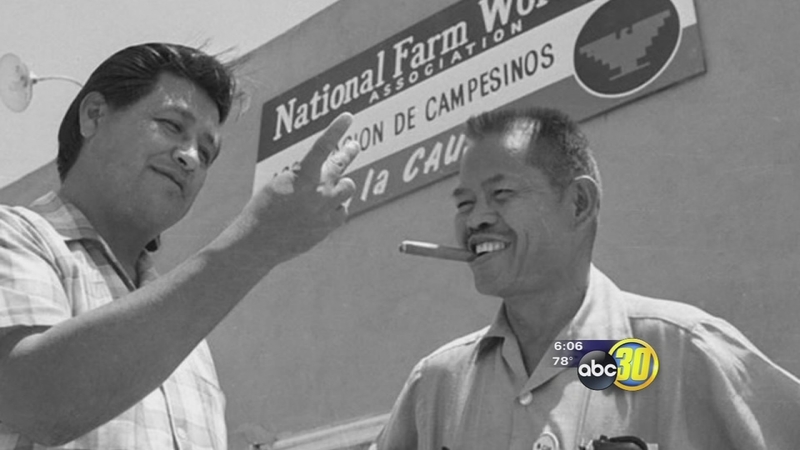 The Filipino labor leader helped form the United Farmworkers of America.
Larry Itliong and Cesar Chavez will forever be linked but Itliong's role in urging Chavez to join forces and form the UFW 50 years ago has long been overlooked.
Cesar Chavez was the face of the farm labor movement but Larry Itliong was the spark.

40 Acres in Delano is a historic site. It served as the first headquarters of the UFW. Gadiano explained, "The pictures tell the story of the movement."

Roger was a teenaged farmworker who remembered the gruff, cigar-chomping Itliong. "The thing about Larry is he had a cause and he worked to improve people's lives, improve wages." Itliong was the push behind the Delano grape strike.

At the Filipino Hall downtown Filipino laborers voted to strike on September 7, 1965. The next day 1500 workers walked out of vineyards.

San Francisco State history professor Dawn Mabalon said Itliong unified farmworkers during a time they were often pitted against each other. Mabalon said, "I think his larger goal was better working conditions for all workers regardless of background and that's the real impact of the Delano grape strike - it was Filipinos and Mexicans coming together."

Mimi Ignacio of Delano said, "Oh it's definitely going to be a defining moment. It's nice to be such a part of such a big history. It's not just here in California."
Grapes still grow across the road from Agbayani Village at 40 Acres.

Itliong and Phillip Vera Cruz - shown in a Delano mural with Chavez - helped get it built to house Filipino elders who had worked the fields.

Gadiano said, "He knew what he was doing. He had a plan."