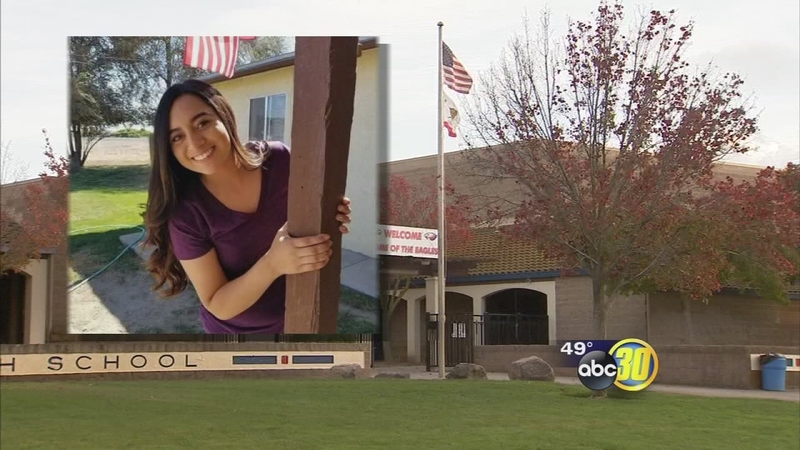 FRESNO, Calif. (KFSN) -- On the field every day, the Firebaugh Eagles perform everything in perfect unison whether it's celebrating a victory or trying to overcome heartbreak.

"I was just stunned and I didn't know what to say," Julian Banda said. "And the first thing I said, 'Is she okay?'"

Julian is Dayla Banda's cousin and a friendly and familiar face to many on the football team. The junior was in a car with her best friend, Karen, and another parent when they hit a patch of black ice early Thanksgiving break.

Dayla suffered multiple fractures and her condition has only worsened.

"They are like two sisters to me it was heartbreaking," Dayla's friend Adrian Gutierrez said. "When they told me Dayla was in critical condition, it hurt me real bad."

Julian knew he was going to tape his wrist for last Friday's game and wanted to ask if his teammates would do the same. That's when he realized they were already doing it.

"I was walking around the locker room, and I seen plenty of teammates writing even if you may know her, may not, everything just came together and played for them," he said. "It really made me smile."

Family members said they hope those prayers continue and that at this point they need a miracle.

"My uncle Frankie said the doctor told them they want to take her off the machines keeping her alive," Julian said. "He said he doesn't want to let that happen because if god is going to take her, he'd to it right now."

Dayla's friends said they aren't giving up on her and will continue to play for her at this Friday's game, just as they did last Friday.

"I'm pretty sure everybody did, we would score touchdowns here and there and we would be like, 'It's for them,'" Gutierrez said.