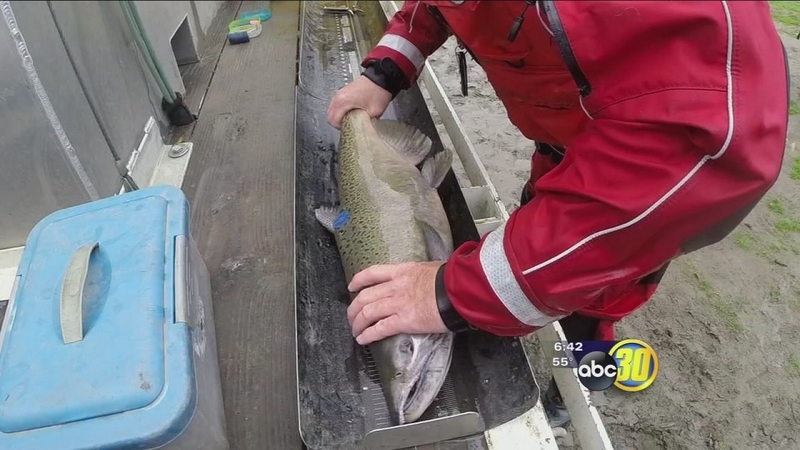 FRESNO, Calif. (KFSN) -- According to biologists, Fresno contains the perfect habitat for fish to reproduce-- most notably the Chinook Salmon.

So every day for the past two months, Don Portz and his team of fish biologists carefully collect stranded salmon found in the San Joaquin River near the town of Newman and relocate them to Fresno. Otherwise, the fish would end up where there is no spawning habitat available.

It's all part of the San Joaquin River Restoration Program.

"The habitat below Friant Dam, those fish can spawn there, produce offspring, and those offspring from February to April may come down through the same section of river as their parents went up the fall before."

Every year over a million fish make their way past the barrier and are funneled into what's called a fyke net where they are checked on daily by fish biologists.

There are five similar type traps set up further upstream. If not, the fish would get stranded and die.

Once inside the net biologists collect the salmon in the water to be studied, measured, tagged, pictures are even taken of each fish to be monitored throughout the salmon's life span.

"The life strategy of a salmon is to go out to the ocean as a juvenile, grow as big as you can, because there's a lot of resources there, and come back to your native stream and lay those eggs, hopefully, in the river that you were born in," said Portz.