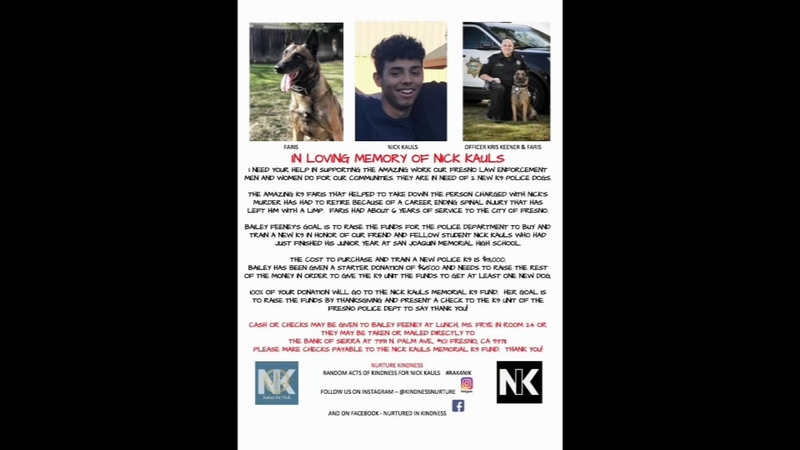 They had help from Faris, a Fresno police dog, but months later, Nick's mother and her friends found out an injury put the dog into forced retirement.

"She found out that Faris the dog that took down Nick's killer had to retire and the K9 unit needed a new dog," said Bailey Feeney, junior at San Joaquin Memorial High School.

A Fresno police canine officer told Action News they had one dog die unexpectedly and two others suffer career-ending injuries, including Faris.

It happened all at once and they didn't have the budget to replace all the dogs.

In stepped Bailey Feeney, a 16-year-old San Joaquin Memorial junior whose older brother was a friend of Nick's. She decided to raise the money -- $13,000 -- to replace Faris.

"I'm hanging up fliers at school and sending a flyer home with every student and then we're going to offer a free dress day if you pay $5 to donate to the cause, you get a free dress day," she said.

Casual day at school will help, but so will the posters she's putting up at businesses across town and her door-to-door soliciting.

Bailey gets a little emotional thinking about the purpose behind her act of altruism.

"I just want to do something in memory of Nick and I think that's a really good way to remember him," she said.