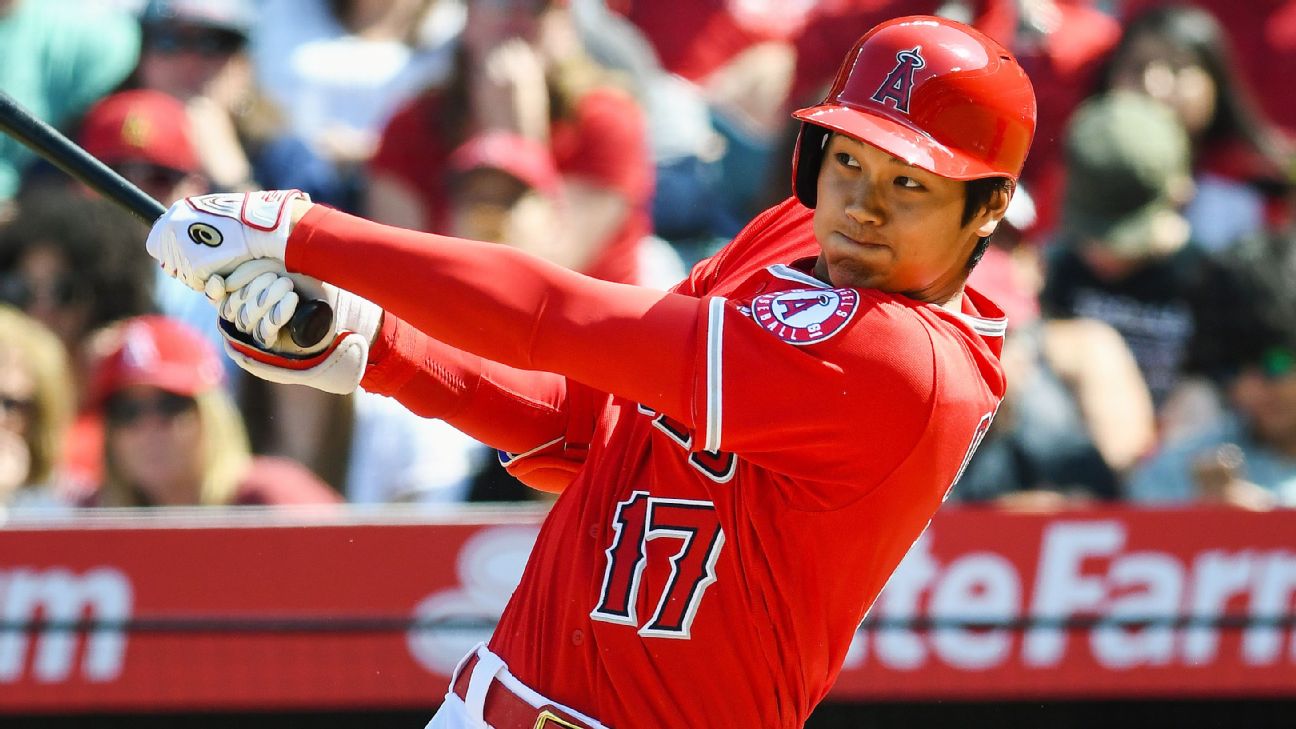 Ohtani earned 25 of 30 first-place votes to run away with the award. The other five votes went to Andujar, who finished as runner-up.

"Accomplishing something this special my first year means a whole lot to me," Ohtani told MLB Network through a translator. "Especially, I think it means a whole lot for people that have been supporting me this whole time, so I'm really grateful."

Ohtani joins Hideo Nomo (1995), Kazuhiro Sasaki (2000) and Ichiro Suzuki (2001) as Japanese players to be honored after his debut year in Major League Baseball. The Angels star was particularly proud to be the first from his country to win the award since Suzuki did so 17 years ago.

"[Suzuki] is someone that [Ohtani] watched ever since he was a little kid and always looked up to until this day," said Ohtani's interpreter, Ippei Mizuhara.

The Angels had high hopes for both Ohtani's bat and his pitching arm, and the 24-year-old lived up to the hype in his first season with the Angels, hitting .285 with 22 home runs and a .564 slugging percentage that would have ranked fourth in the AL if he'd had enough plate appearances to qualify for the leaderboards.

Angels slugger Mike Troutlauded Ohtani in a statement released by the team.

"I want to pass along my congratulations to Shohei for this special honor," Trout said. "It's great to see all of his hard work and effort recognized with this very prestigious award. All of us enjoyed playing alongside and watching Shohei excel as a two-way player and make history along the way. I have no doubt the best is yet to come!"

In 51.2 innings over 10 starts, he went 4-2 with a 3.31 ERA and 63 strikeouts, flashing the ace-caliber stuff that had teams eager to sign him primarily for his ability on the mound.

The bat was more impressive than anticipated, however, and Ohtani joined Babe Ruth as the only players to hit at least 20 home runs and pitch at least 50 innings in the same season. Ruth did that in 1919 -- his last season as a pitcher. The Red Sox sold him to the Yankees that offseason, and he became a full-time outfielder in 1920.

Ohtani will serve as a full-time hitter in 2019, as he underwent Tommy John surgery the day after the regular season ended. The surgery will likely prevent him from pitching in 2019, but he should see significant time as the Angels' designated hitter, though he might not be ready at the start of the season.

Ohtani, a phenom in Japan for the Nippon Ham Fighters, was the subject of an intense recruiting campaign after he was posted. Although he pitched just 25 innings in 2017 because of an ankle injury, in 2016 he had a 1.86 ERA in 140 innings and hit .322 with 22 home runs. Because he was younger than 25 years old, Ohtani was subject to international signing rules, which capped his bonus at $3.557 million and limited him to a rookie salary scale (the signing team also had to pay a $20 million posting fee to the Fighters).

That essentially meant all 30 teams could afford to go after Ohtani; if he had waited until he was 25 to come to MLB, he would have commanded a $200 million contract. Ohtani narrowed his finalists to the Angels, Dodgers, Giants, Padres, Mariners, Rangers and Cubs, and then he signed with the Angels for a $2.315 million bonus.

Ohtani struggled in spring training, both at the plate and throwing strikes while pitching, but he made an immediate impression in the regular season. He beat the A's in his first start on April 1, allowing three runs in six innings. Pitching against the A's again in his second start, he allowed just one hit in seven innings with 12 strikeouts.

Meanwhile, after going 1-for-5 in his first game at DH, he homered in three straight games and became the biggest story in the game the first couple months of the season.

His first career home run came in Anaheim and was one of the most memorable moments of the season, as Angels fans gave him a huge ovation, but Ohtani was greeted with silence by his teammates as he reached the dugout. As he joyfully looked for somebody to celebrate with, he finally grabbed Ian Kinsler before his teammates mobbed him.

Ohtani landed on the DL in early June and returned a month later. He hit .283/.354/.580 after his return from the DL but made just one abbreviated pitching appearance, lasting 2.1 innings in a Sept. 2 start against the Astros. Still, he set a record for home runs by a Japanese rookie, and his .649 slugging percentage from Aug. 1 onward was the second-highest in the majors behind that ofChristian Yelich.

Yankees rookies Andujar and Torres helped their team to its first 100-win season since 2009. Andujar hit .297 with 27 home runs and 47 doubles, ranking seventh in the AL in extra-base hits while driving in 92 runs. His defense at third base was an issue, however, with minus-25 defensive runs saved, and that might have hurt him in the voting.

Torres finished with a .271 average and 24 home runs in just 123 games, impressive power numbers for a 21-year-old middle infielder. He claimed three second-place votes and 16 votes for third place.