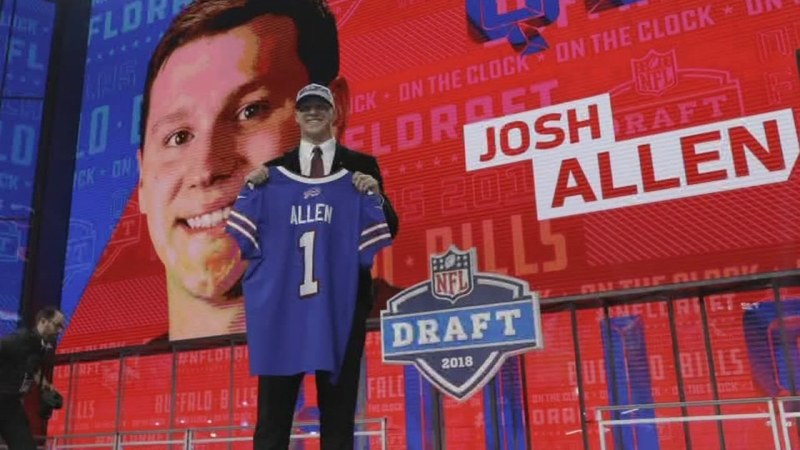 The Buffalo Bills selected the quarterback with the 7th pick overall in the 2018 NFL Draft. Allen who played at Firebaugh High School, Reedley College before starring at Wyoming is now the future face of the franchise.

Firebaugh's Josh Allen is presented with his Buffalo Bills jersey by Commissioner Roger Goodell during the first round of the NFL football draft, in Arlington, Texas.

Overseeing his first draft in Buffalo, general manager Brando Beane moved up five spots in the order by making a trade with Tampa Bay to select Allen seventh overall on Thursday night. Tampa Bay acquired the Bills No. 12 pick and Buffalo's two second-round selections this year: 53rd and 56th.

At 6-foot-5 and 237 pounds, Allen is a strong-armed but occasionally inaccurate passer after spending the past three years at Wyoming. He finished 365 of 649 for 5,066 yards passing with 44 touchdowns and 21 interceptions in 27 games with the Wyoming Cowboys.

Allen's status a potential No. 1 pick was derailed less than 24 hours before the first round began after Yahoo Sports reported the quarterback sent the now-deleted tweets in 2012 and 2013. They contained racially insensitive language and offensive statements.

Allen apologized for the posts in an interview with ESPN early Thursday. He said he was parroting rap lyrics and catchphrases from TV and pop culture, adding he was "young and dumb" at the time.

ESPN reported the tweets were removed from Allen's account when it was vetted in January.

Last week, both the Firebaugh and Reedley communities honored Allen with rallies and community events wish him good luck.

Allen threw for 1,812 yards, 16 touchdowns, and 6 interceptions in 11 games for Wyoming last season.

Allen became the third quarterback selected in the draft, following Oklahoma's Baker Mayfield, who went first overall, and Southern California's Sam Darnold, who was picked No. 3 by the New York Jets.

Now the question becomes when Allen will be deemed ready to take over as starter on a team once again hitting the reset button on offense. He becomes the heir apparent to replace Tyrod Taylor. Buffalo's three-year starter was traded to Cleveland last month despite helping the Bills to a 9-7 record and end a 17-season playoff drought that stood as the longest active streak in North America's four major professional sport.