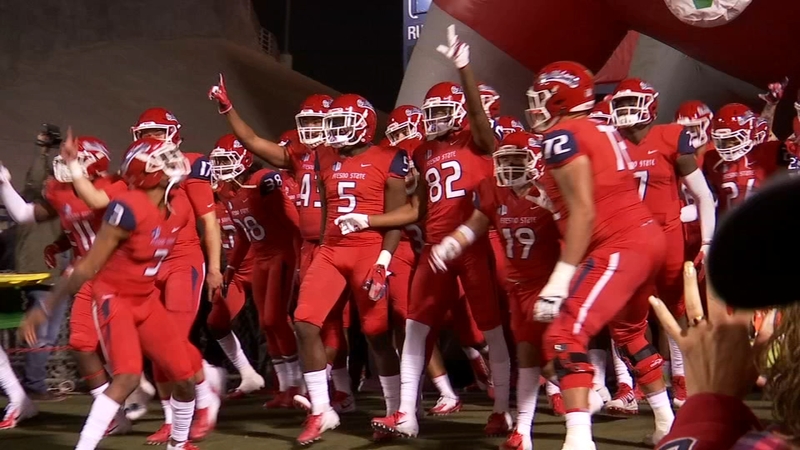 FRESNO, Calif. (KFSN) -- On one of the biggest stages in all of sports, Fresno State fell behind by 18 points but in the fourth quarter rallied to have a chance to tie the game in the final two minutes.

"I was happy with the way our guys competed, played really hard. Came back and gave ourselves a chance," said head coach Jeff Tedford.

Jorge Reyna, in his first start as the Bulldogs quarterback, had as many touchdowns as he did fumbles. But his ability to bounce back is what impressed Coach Tedford.

RELATED: Fresno State falls to USC, 31-23 in the Bulldogs season opener at the Coliseum

"I thought he played really, really tough. He took some shots and made some plays with his legs both in designed runs and pulling it down and scrambling. I thought there was a lot to build on," Tedford said.

If not for an interception in the Trojans' end zone, the Dogs might have pulled off the upset. Incredibly, that exact statement was made almost a year ago for this week's opponent.

Last year, Josh Hokit was picked off in the end zone in Minneapolis and the Golden Gophers were able to hang on for the 21-14 win.

"I'm sure next time we'll put a little bit more on it to get him the ball quicker," Tedford said.

It's another matchup against a power five school and what stands out is their size.

"it's a massive offensive line. Everybody is over 300 pounds, they have a 400-pound tackle," explained Tedford. "We have our hands full trying to stop the run and trying to get them in long-yardage situations."

It's the Dogs' first home game since winning the Mountain West Championship. Coach Tedford is hoping the Red Wave turns out.

"It's nice to be home, always enjoy playing in front of our fans and when Bulldog Stadium gets going it definitely is an advantage for us so I hope they come out Saturday night," he said.

Fresno State is once again the underdog in their game against Minnesota favored by three.