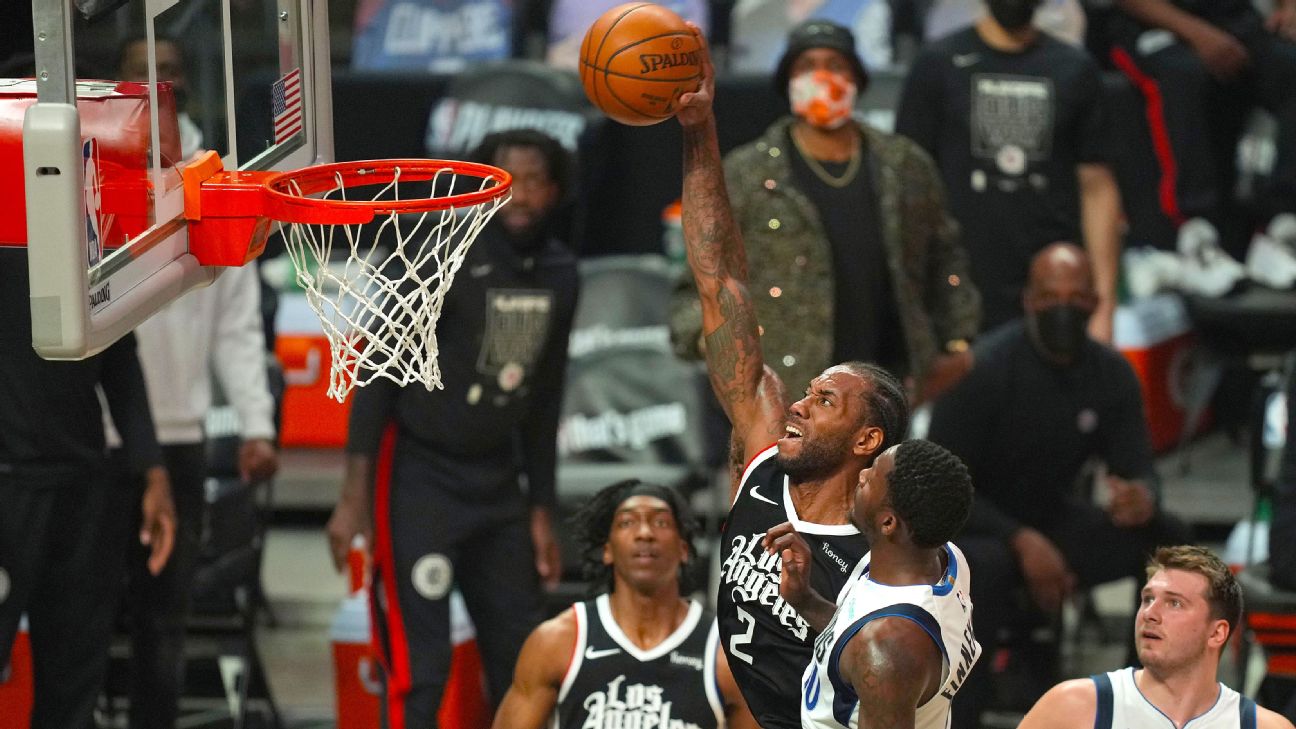 LOS ANGELES -- As a 19-point fourth-quarter lead shrunk to seven with two minutes to go and anxiety began to spread at Staples Center, Kawhi Leonard got the kind of help he did not get last year in Game 7.

Leonard hit Reggie Jackson and Marcus Morris Sr. for consecutive 3-pointers to propel the LA Clippers back into the second round with a 126-111 victory over a relentless Luka Doncic and the Dallas Mavericks on Sunday before an announced crowd of 7,332.


Nearly nine months after suffering an embarrassing Game 7 defeat in the bubble, the Clippers are returning to the Western Conference semifinals to face the top-seeded Utah Jazz by exorcising some of their playoff demons and overcoming an incredible series from Doncic.

"Last year was last year," said Clippers coach Ty Lue, who is just the second head coach ever to be undefeated in his first four Game 7's, behind Red Auerbach. "We talked about it when the season started, that's over and we've got to look going forward.

"We can't keep looking behind and what happened in the bubble. That s---'s over."

The Clippers avoided another playoff disappointment by showing more fight and heart in this series than they did last year in the bubble when they blew a 3-1 series lead and collapsed in their second-round loss to the Denver Nuggets.

This time, the Clippers pulled off their own playoff comeback. They are the fifth team in playoff history to win a series after losing the first two games at home.

Their season was teetering just over a week ago when they fell behind 30-11 in Game 3 before a raucous Dallas crowd. But they weathered that storm and won three times in Dallas, including staving off elimination on the road in Game 6.

"I mean, Game 3 when we were down 30-11, I think we were one or two plays away from almost getting swept," said veteran forwardNicolas Batum. "And we find something in us like resiliency and some toughness, like, OK, we can't go down like that, we are a good team. We are a good team and we have to show it and we came back.

The Clippers, who also got 22 points and 10 assists from Paul George, managed to finally break through and become the only team to win at home in this entire series. The road team won the first six games in the series for the first time in NBA playoff history (excluding last year's games in the bubble), according to Elias Sports Bureau.

The Clippers entered this contest probably feeling like they were fighting history. They were just 3-5 all-time in Game 7's entering Sunday, dropping their previous three by an average of 13.7 points per game.

Doncic did everything he could to send the Clippers home. He was scintillating yet again, finishing with 46 points, 14 assists and seven rebounds. He averaged 35.7 points, 10.3 assists and 7.9 rebounds in his second postseason, becoming the youngest player in NBA history to average 35 points per game in a playoff series at 22.

It was an incredible first-round duel between Doncic and Leonard, and both stars did not disappoint in the Game 7 showdown. Following perhaps his best all-around performance as a Clipper with 45 points and timely defense on Doncic in Game 6, Leonard just missed a triple-double with 28 points, 10 rebounds, nine assists and four steals. And like he did in Game 6, he took on the responsibility of guarding Doncic when he could.

While Doncic kept posting big numbers, Leonard was able to get enough critical stops when the Clippers needed them.

But his offense set the tone for the Clippers. Leonard -- who became only the second player since Shaquille O'Neal in the 2000 NBA Finals to average 30 points per game on 60% shooting in a playoff series -- hit five of his first six shots, including a thunderous one-handed dunk for 13 points in the first quarter.

The Clippers waited all series for their league-leading 3-point shooting to show up, and it came just in time. They buried 20 3-pointers on Sunday, the most 3's made by a team in a Game 7 in playoff history.

The Clippers led by eight at the half but Dallas opened the second half with a 19-6 run to take an 81-76 lead. But Morris buried two of his postseason career-high seven triples to spark a 30-6 run that gave the Clippers a 106-87 lead with 9:20 remaining.

Dallas made its last run as Doncic cut the deficit to seven with a 3-pointer with 2:06 left. But Leonard found Jackson for a 3. And then with his twin brother, theLos Angeles Lakers'Markieff Morris, watching from the front row, Morris Sr. took a pass from Leonard and drilled a 3 from the corner to set off a celebration in Staples Center.

"They pushed us," George said. "They got us war-ready. Great team we played. Unbelievable superstar in Luka. They pushed us, they challenged us, but we stuck in there, hung in there and played for one another.

"This team forced us to play on a nightly basis, a full 48-minute game," George added. "Last year ... let's not even get into last year. We are onto a whole other season. We just hung in there, we stuck together, we battled it out and we knew what it took to win tonight." 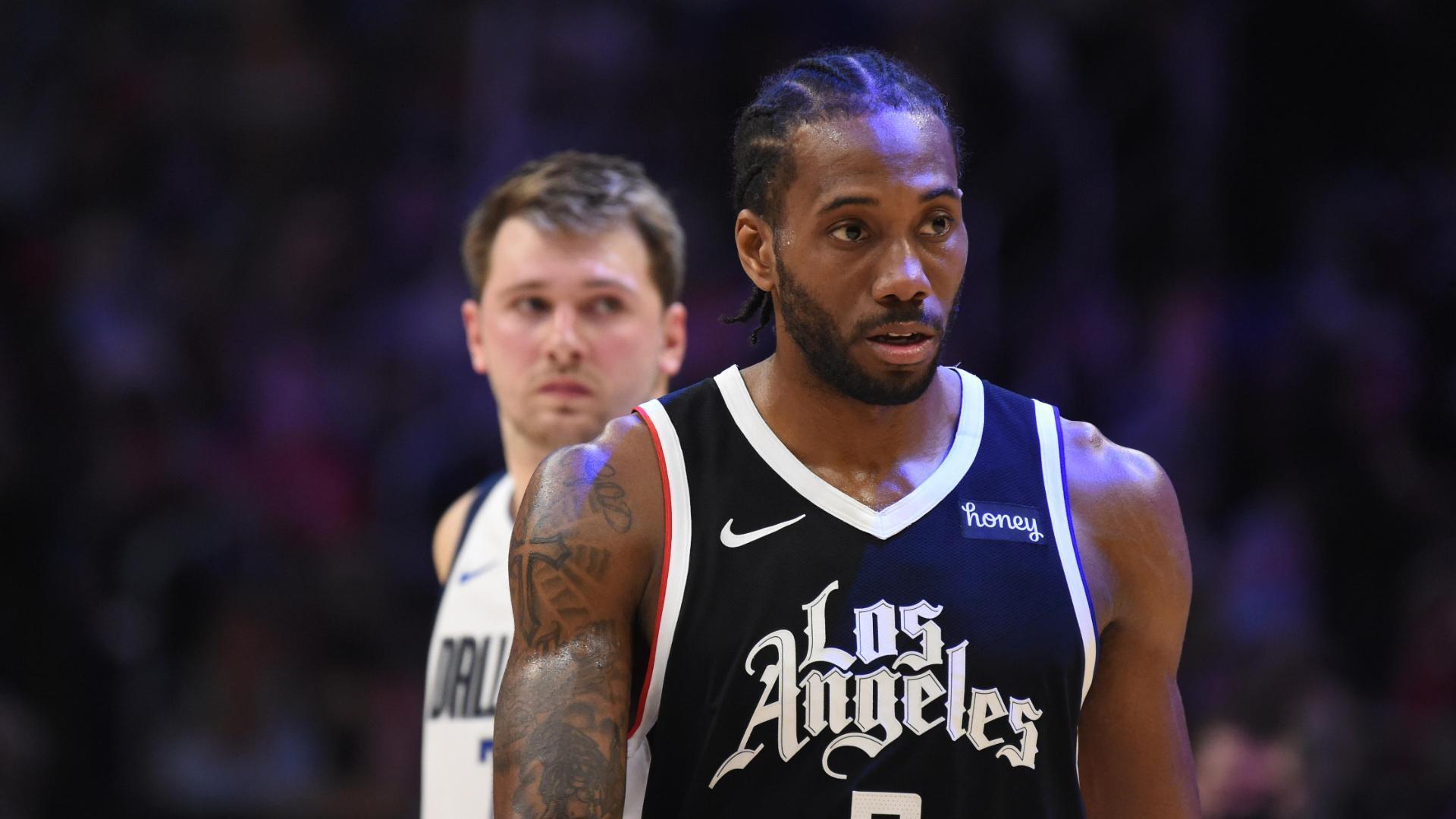