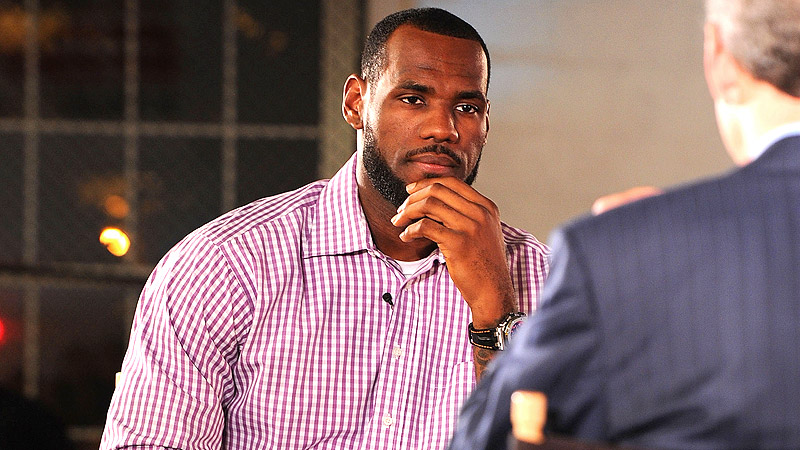 NBA fans already know what day it is.

Exactly 11 years ago, LeBron Jamesannounced he had made the "very tough" decision to leave his hometown Cleveland Cavaliers in favor of -- drumroll, please -- taking his talents down to South Beach to link up with Dwyane Wade and Chris Bosh on the Miami Heat.


The spectacle -- er, "The Decision," was a defining moment in James' career that would be maligned for years to come and provide, in the eyes of LeBron haters, an irrefutable example of why he is, in fact, the worst.

But whether you're Team LeBron or not, the most important thing to come out of the 75-minute live special was a phrase that took on a life of its own. When King James proclaimed "I'm going to take my talents to South Beach" he couldn't have known the hysteria that would ensue, or that we would still be talking about it all these years later.

While the line left an indelible mark on sports and pop culture -- you need not look far to find copious amounts of memes, merchandise and Instagram captions paying homage -- it is far from the only athlete one-liner to become a phenomenon. In honor of another year since "die-hard LeBron fans" burned jerseys and Dan Gilbert penned a letter in Comic Sans, I'm revisiting 10 of the most iconic one-liners in sports.

I'm going to assume that you will agree wholeheartedly with every phrase I highlight in this story. But, on the off chance you don't, I would like to preemptively manage expectations.

You won't find Lou Gehrig's famous "Today, I consider myself the luckiest man on the face of the earth" or Muhammad Ali's "If you even dream of beating me you'd better wake up and apologize" below. The aforementioned quotes (and many others that are omitted) all deserve their flowers, but the criteria I abided by when compiling this list was whether or not the line had a sizable impact on the intersection of sports and pop culture. Basically what I'm saying is if it didn't break the internet, I passed it up, and thus this story is laden with recency bias.

I also made a point to limit this list to athletes, so iconic lines such as New York Jets coach Herm Edwards' "You play to win the game!" andAl Michaels' "Do you believe in miracles?" were omitted.

All right, now that you know what you're in for, here goes:

If we're being real, Marshawn Lynch has enough material that this entire story could be dedicated to him. For a man of few words, Beast Mode manages to say so much. The former Seattle Seahawks running back delivered this line repeatedly during Super Bowl XLIX media day. Lynch, who faced a$500,000 fine from the NFL if he failed to make himself available on media day,stayed at his designated podium for 4 minutes, 51 seconds and repeated some variation of the phrase in response to the 29 questions he was asked.At the 4:51 mark, he said "time," stood up and walked away from the microphone.In the years since, Lynch has blessed us with lines such as,"Take care of y'all's bodies, take care of y'all's chicken, take care of y'all's mentals." I can't promise looking yourself in the mirror each morning and repeating this bit of Beast Mode wisdom will improve your quality of life, but it's a thing I'm trying.


There were many iconic moments throughout Allen Iverson's illustrious career. Namely, the times he crossed up Michael Jordan and stepped over Tyronn Lue. But no event rose to the level of notoriety as the time The Answer said the word "practice" 22 times.. On May 7, 2002, the Philadelphia 76ers star sat in front of the media for what was intended to be an exit interview of sorts, and found himself on the defensive as journalists questioned his dedication to practice -- one of his coach's frequent and public gripes about his star player. The now-legendary rant was encapsulated by Iverson's humorous and incredulous demeanor, but in truth the story behind his words is darker and more complicated than how it is widely remembered.

Has there ever been a more magical final game in an NBA career? When the late, great Kobe Bryant hung up his sneakers he did so on the heels of a 60-point performance. No offense to Michael Jordan, but Black Mamba's swan song was a far-cry from whatever His Airness did with the Washington Wizards (not much). Sure, Kobe laughedself-deprecatingly throughout the duration of his farewell tour about how his body had failed him, but when it came time to will himself to one more glorious moment? The Los Angeles Lakers legend showed up in true Kobe fashion. After putting up 50 shots in his final game, he addressed the crowd with a heartfelt farewell speech that ended with two words and a mic drop.T-shirts with the phrase were available to buy on his website within minutes of him delivering the words to an adoring crowd at Staples Center. I won't feign surprise that Mamba showed up prepared.

The most transcendent moment of David Ortiz's career wasn't on the plate. It occurred in the wake of the Boston Marathon bombings, when Big Papi walked to the middle of the field, microphone in hand, and spoke off the cuff and from the heart. What came out was a profound -- and profane -- rallying cry for a city that was trying to reclaim itself and return to some sense of normalcy after a devastating tragedy:"This is our f------- city. And nobody's going to dictate our freedom. Stay strong." While no one knew Ortiz was going to curse on the live broadcast,the chairman of the Federal Communications Commission at the time,Julius Genachowski, was quick to voice his support, tweeting :"David Ortiz spoke from the heart at today's Red Sox game. I stand with Big Papi and the people of Boston." In the months that followed, t-shirts with Ortiz's impassioned message could be purchased from street vendors at nearly any corner in the city. I know because I bought one.

From the man who had a custom Mercedes-Benz golf cart transport him around Dallas Cowboys training camp back in 1996 comes the swaggiest mantra of them all. For Deion Sanders, looking good to feel good is a way of life. In his playing days, Prime Time brought legendary looks everywhere he went complete with bandannas, windbreakers, jewelry, mink coats and impeccable hair. He also won two Super Bowls and appeared in a World Series -- he remains the only athlete to play in both -- so I'm not willing to dismiss his belief. Now, as the head coach of Jackson State, Sanders is determined to put his mentality to work for the Tigers. He also still looks fly ... naturally.

To put it mildly, Simone Biles is in a league of her own. The most decorated gymnast of all time continues to dial up the difficulty even though there's no one on her heels. That's not meant as a slight to any of the other stars headed to Tokyo for the Olympics, Biles is just that good. The only problem with the 24-year-old's sheer dominance is that her sport fails to award higher marks when she nails moves that require a superior level of difficulty. Why? Part of the reason could hinge on a concern for the safety of gymnasts not nearly as skilled as Simone. By assigning dangerous moves a low start value, the federation quietly discourages others from risking attempting them. But it could also be because they want to keep the playing field level. When Biles was asked why she continues to do the moves despite not being properly rewarded she replied, "Because I can." Talk that talk, GOAT.


There was really nothing quite like The U in its prime. After Miami beat FSU in 2000, wide receiver Santana Moss was interviewed by an on-field reporter andexpounded on his performance saying, "big time players, step up in big games." It was an iconic catch-phrase that I eagerly worked into my repertoire and peddled as my own after a high school lacrosse championship. But I was today years old when I learned that the quote is not actually attributed to Washington Football Team legend, Moss. Rather he was championing Rohan Marley. The more you know. Now if you'll excuse me, I have to go watch "The U" and "The U Part 2."

Kevin Durant would be on here twice, but I decided to exclude the written wordin an attempt to make this thing more manageable. So everyone's favorite way to announce a change of profession, "My next chapter" -- an ode to when KD famously announced his plans to join the Golden State Warriors via The Players' Tribune -- didn't make the cut. However, no list of sports one-liners could be complete without"You the real MVP."On May 6, 2014, Durant gave a heartfelt speech as he accepted his first NBA Most Valuable Player award. The then Oklahoma City Thunder star's tearful thank you to his mom, Wanda Durant, birthed a pop culture phenomenon with the phrase I use whenever someone does anything nice for me, ever:

I'm not going to claim to know how it feels to trounce the Los Angeles Lakers 131-92 in Game 6 at TD Garden to clinch your franchise's first title in 22 years -- and your first title in a 13-year career -- but I imagine Kevin Garnett's postgame interview about sums it up. On June 17, 2008, after he, Paul Pierce and Ray Allen led the Boston Celtics to victory, a euphoric Big Ticket yelled "Anything's possible!" to ESPN's Michele Tafoya. KG went on to shoutout his loved ones and proclaim that he was "on top of the world!" It might have gone down before the days of memes, but fear not, there was plenty of merchandise.

"I know every single person asking me a question can't play as well as I can and never will ..."

Venus Williams was not in the mood to play games off the court at the French Open. Last month, in the wake of Naomi Osaka withdrawingfrom the tournament to focus on her mental health, Williams was asked about how she has dealt with media criticism throughout her storied tennis career. The 7-time Grand Slam champion's response was that of someone who isn't new to this. Venus replied in a matter-of-fact manner that left no question where she stood on the subject saying, "For me personally, how I cope, how I deal with it, was that I know every single person asking me a question can't play as well as I can and never will. So no matter what you say, or what you write, you'll never light a candle to me. That's how I deal with it." Any further questions? 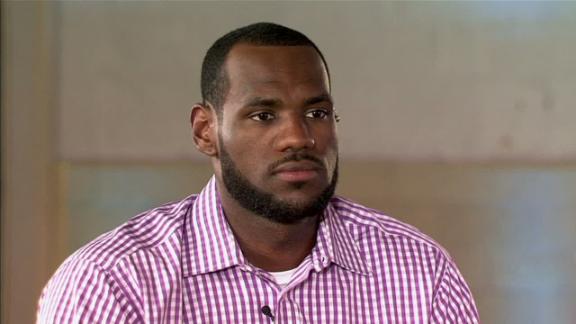 LeBron makes 'The Decision'
On July 8, 2010, LeBron James announced he was taking his talents to South Beach to play alongside Dwyane Wade and Chris Bosh. 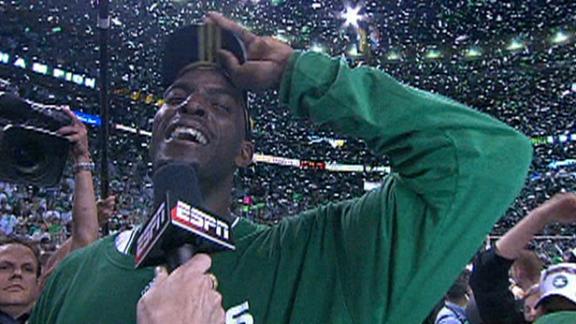 On this date: 'Anything is possible,' as Garnett, Celtics win title
On June 17, 2008, Kevin Garnett gives his famous postgame interview after the Celtics knock off the Lakers in Game 6 of the Finals. 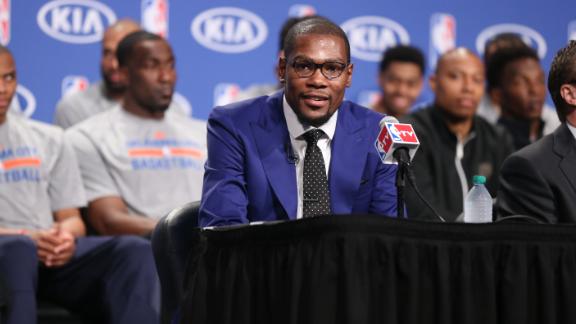