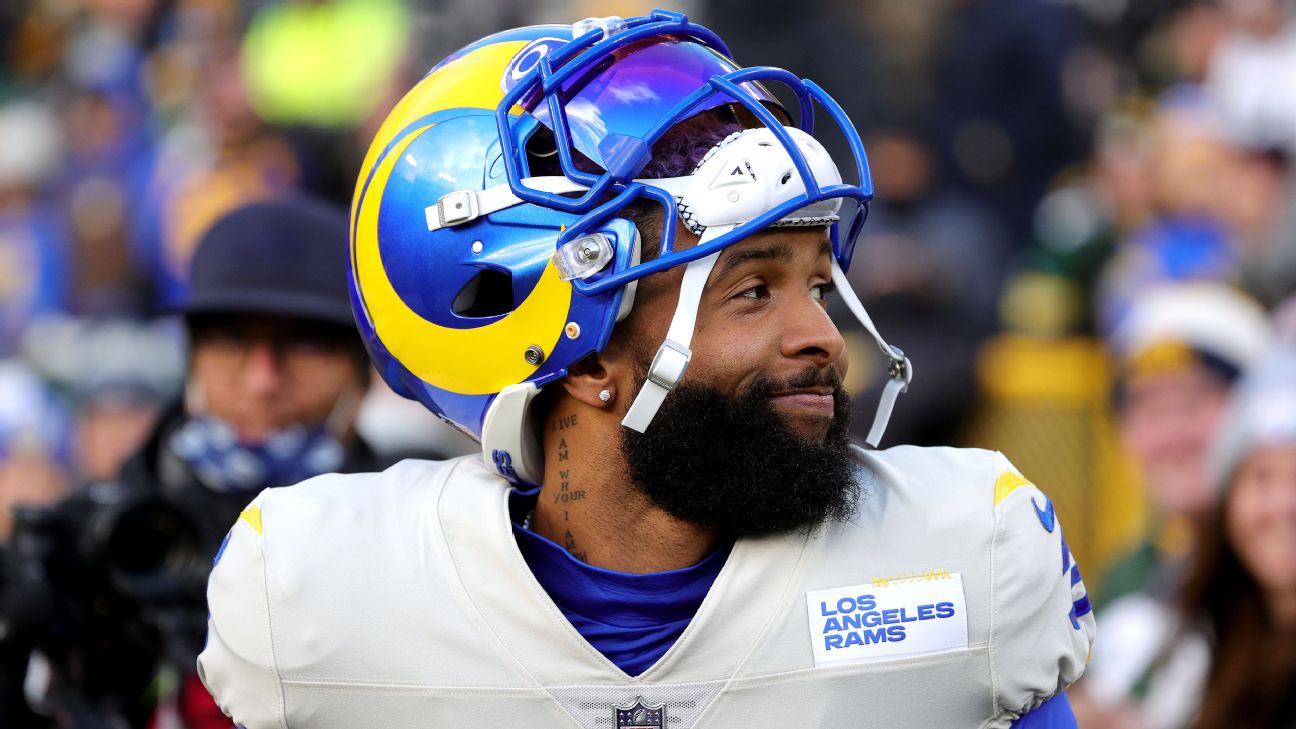 December is here, the holiday spirit is in the air and the NFL season continues into Week 13. This weekend, there are six division matchups that could impact the playoff races, including a battle for first place atop the AFC East on Monday Night Football.

As game time approaches, the injury report has teams evaluating the availability of key players. QuarterbackDaniel Jones of the New York Giants will not play because of a neck injury. In addition, the New England Patriots lost an essential part of their defense with rookie safetyKyle Dugger going on the reserve/COVID-19 list. Tampa Bay Buccaneerswide receiver Antonio Brown will miss his seventh straight game because of an ankle injury and a suspension for violating COVID-19 protocols.


On the positive side, Philadelphia Eagles QB Jalen Hurts said he plans to play after spraining an ankle last week against the Giants. Indianapolis Colts defensive lineman DeForest Buckner relayed a similar message about his hyperextended knee for his team's matchup with the Houston Texans. The Arizona Cardinals hope QBKyler Murray and WRDeAndre Hopkins can return to the field after missing time with an ankle and a hamstring injury, respectively. According to coach Kliff Kingsbury, they will -- again --be game-time decisionsat theChicago Bears.

Our NFL reporters have the latest injury updates and developments surrounding the key players around the league.

Detroit's most dynamic offensive player will miss Sunday's game with a shoulder sprain, which he suffered during the first half of the Lions' Thanksgiving Day loss to Chicago. Lions coach Dan Campbell says Swift might be a "week away" from returning and that he's still pretty sore and didn't practice this week. The Lions haven't considered shutting him down for the year, although they haven't won a game. "We still have hope in Swift," Campbell said. -- Eric Woodyard

Gordon is listed as doubtful for Sunday night's game in Kansas City, but he would have to improve significantly before then to have any chance of playing against the Chiefs. He did not practice this week, and when asked if he would even participate in the team's walk-through Saturday before the Broncos left for Kansas City, coach Vic Fangio also called that "doubtful.'' It means rookie Javonte Williams will get the bulk of the work Sunday night, with Mike Boone getting some snaps as well. -- Jeff Legwold

The Texans are expecting to get Britt back from injured reserve after he returned to practice last week. Houston put Britt on injured reserve on Oct. 30 after he first injured his knee in Week 5 against the Patriots. Right tackle Charlie Heck said Friday that having Britt back will bring "a consistency" back to an offensive line that has also been without Laremy Tunsil and Marcus Cannon for a significant portion of the season. -- Sarah Bishop

The Raiders in general, andFoster Moreau in particular, have been in this situation before, with an injured Waller going down and Moreau getting his targets and snaps. Against Philadelphia in Week 7, Moreau had six catches for 60 yards, including an 18-yard TD, with Waller out nursing an ankle injury. Now, Waller is officially out after not practicing all week in the wake of his back and left knee injuries suffered in the first half of the Raiders' Thanksgiving win at Dallas. Moreau might not have the Pro Bowl accolade of Waller, but he does have the trust of quarterback Derek Carr. -- Paul Guttierez

Beckham's hip injury has affected his ability to practice throughout the week and he is questionable going into Sunday's game against theJacksonville Jaguars, according to Rams coach Sean McVay. McVay did add, however, that he would be surprised if Beckham was unable to play. In the off chance the Rams are without the eighth-year pro, whom they signed to a free-agent deal ahead of Week 10, watch for rookie Ben Skowronek, a seventh-round draft pick from Notre Dame, to play alongside Cooper Kupp and Van Jefferson.

Henderson's game status for Sunday against the Jaguars is questionable, according to McVay. Henderson is dealing with a thigh injury that has kept him sidelined through the majority of the practice week. If Henderson is unable to play, which could come down to a game-time decision, watch for Sony Michel to start. -- Lindsey Thiry

Cook was officially ruled out Friday and will be replaced by Alexander Mattison and rookie Kene Nwangwu. Both backs will receive a share of the offensive snaps, hoping to inject life in the Vikings' run game with their respective skill sets. Darrisaw has an ankle injury that will keep him out in Detroit. Backup Rashod Hill, who started the first five games of the season, will take his place. -- Courtney Cronin

The reliable veteran "passing back," who has stepped in for the injured James White since the third week of the season, popped up on the injury report this week as a limited participant due to his knee. Bolden's pass-protection is viewed as the best among Patriots RBs, and there is no sure-fire replacement for him on the roster or practice squad. -- Mike Reiss

The Giants will face the red-hot, blitz-happy Dolphins without their starting quarterback in Jones. That will make life difficult for veteran backupMike Glennon, as he's looking for his first win since the 2017 season when he was with the Bears. It also doesn't help that Glennon is almost certainly not going to have wide receivers Kadarius Toney (quad/oblique) and Sterling Shepard(quad). Not ideal for an offense that already averages under 20 points per game. -- Jordan Raanan


The Jets are optimistic about Davis' chances of playing Sunday against the Eagles. They feel better about his chances than they did last week when he was listed as doubtful and didn't play. Davis practiced Friday and could be in line for at least a part-time role. -- Rich Cimini

Hurts was a limited participant at practice all week after spraining his left ankle in the second half against the Giants Sunday. Hurts indicated he would be ready to play against the Jets but coach Nick Sirianni was noncommittal on Friday. With Hurts still sore, Gardner Minshew received some first-team reps at practice this week. -- Tim McManus

Of the three, only Haden is certain to miss Sunday's game after he was ruled out with a foot injury suffered in the tie against the Detroit Lions. Heyward missed Friday's practice because of an illness. However, Watt was came off the COVID list Saturday and is cleared to play. He wasn't given an injury designation in the final report, but his availability seems far from guaranteed. The Steelers' run defense already ranks No. 28 in the NFL, and the task of slowing Lamar Jackson and the Ravens becomes infinitely harder if the team is missing Watt and Heyward. -- Brooke Pryor

As expected, the Niners will be without Samuel on Sunday against the Seattle Seahawks. Coach Kyle Shanahan officially ruled him out on Friday afternoon, which means the Niners will be without their best offensive weapon. The good news is that Samuel was seen running on the side this week and seems to be trending in a positive direction to return next week against the Cincinnati Bengals. Without Samuel, look for the Niners to get wideout Brandon Aiyuk plenty of touches, with Trent Sherfield and Jauan Jennings also getting more involved in the passing game.

Early in the week, Shanahan said Warner would miss one to two weeks. But there's at least a chance -- however remote -- that Warner will be back on the field against the Seahawks. He's officially listed as doubtful on the injury report for Sunday, but Warner spent Thursday and Friday working on the side in full practice uniform and helmet.

"Fred is trying as hard as he can to go," Shanahan said. "I won't put it past him, but he's going to have to do some hard convincing." If, as expected, Warner cannot play, Azeez Al-Shaair will take over as the middle linebacker and handle defensive playcalling duties for the 49ers.-- Nick Wagoner

Collins is listed as questionable for Sunday's game vs. the 49ers, as are backups Rashaad Penny and Travis Homer. Collins was limited all this week, while the other two were full participants Friday. "They all got work this week, so we've just got to figure out who's OK and who isn't by Sunday," coach Pete Carroll said. Does that mean 36-year-old Adrian Peterson could be elevated Sunday, four days after signing to Seattle's practice squad? Carroll said that's a realistic possibility and that Peterson had a good week of practice. -- Brady Henderson 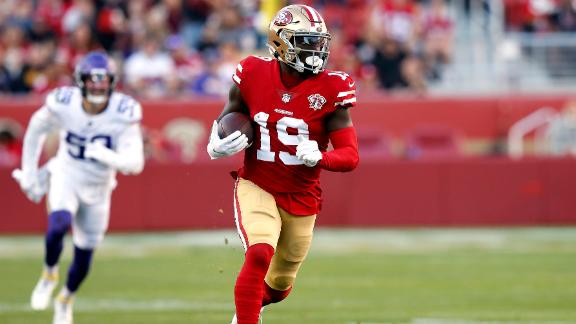