Which NBA player had the best kicks in the first week of the season? 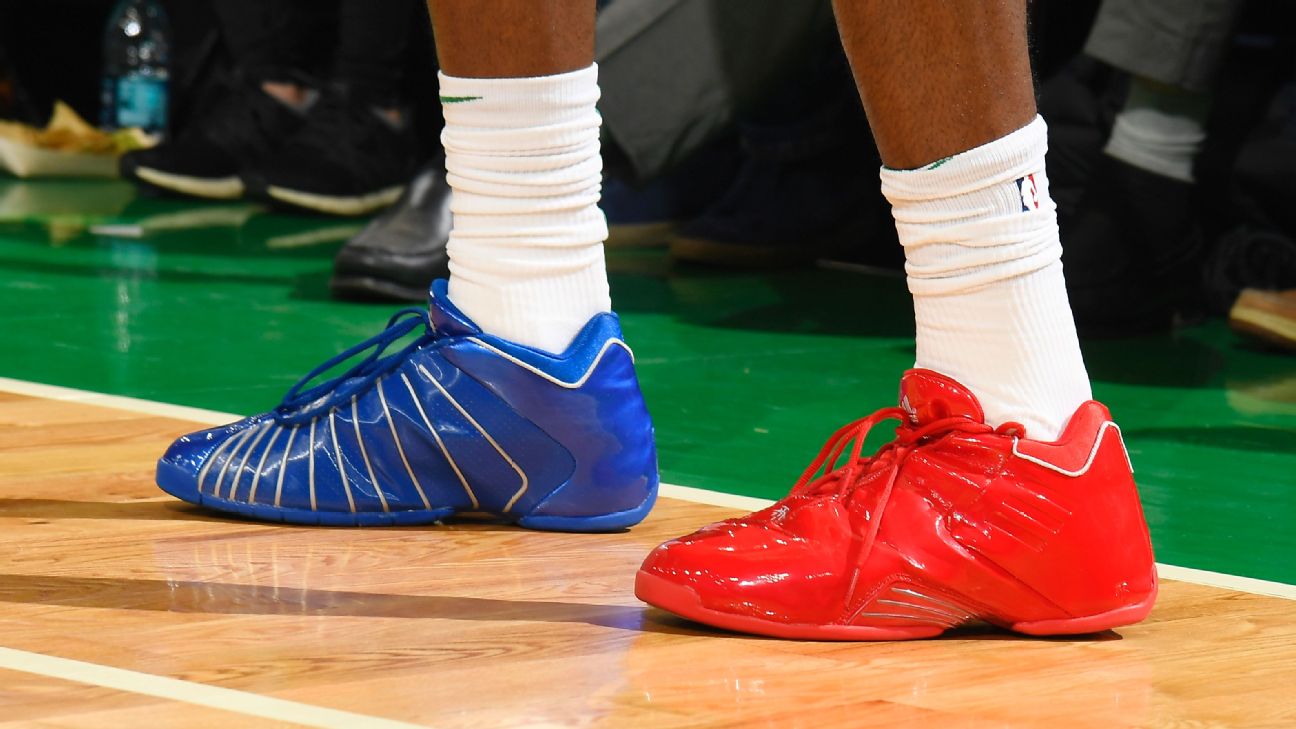 In the first week alone, the NBA hardwood is looking more colorful than at any time in the league's 73-season history, thanks to new anything-goes color rules for sneakers.

With a lack of restrictions across the board, players took full advantage of the newfound freedom and broke out confidently clashing pairs from the jump. During the very first game on the schedule, Boston Celtics wing Jaylen Brown's latest sneaker tribute to his Hall of Fame mentor and fellow Adidas athlete Tracy McGrady immediately set the tone for the week. The gleaming red and blue, mismatched, patent-leather sneakers worn by McGrady in the 2004 All-Star Game were unmistakable atop the home floor of the Boston parquet.

"He was wearing Sixers colors!" teammate Gordon Hayward said with a laugh.

Shortly after, as the Golden State Warriors received their third championship ring in four years, Stephen Curry donned a celebratory "Ring Night" pair of the model worn during last season's Finals. His latest special-edition Curry 5 featured a layered graphic highlighting each of his children's names -- Riley, Ryan and Canon -- along with a pattern featuring three rings atop a bridge blueprint design.

"Obviously, representing [the] Bay Area, but more so having the blueprint of becoming a champion, what we've done as an organization with the Warriors and looking ahead at what's to come," said Curry.

The following night, reigning sneaker champ PJ Tucker put the league on notice once again -- by switching shoes every single quarter in his first game of the year. The first pair worn was an original 2006 edition of the Nike Kobe 1, autographed along the Swoosh by Kobe Bryant for good measure.

The pair's "Blackout" nickname has long been confusing to most -- the purple-and-white-accented shoe is clearly not all black -- but it stems from one of Bryant's more secretive and maniacal workout tactics. Just after being traded to the Lakers in 2004, Caron Butler reached out to Bryant to schedule their own private workout session ahead of the season. "Meet me at 5 [a.m.] -- do you want to black out?" asked Bryant.

Four hundred turnaround jumpers was just the warm-up. Full-court-sprint, pull-up 3s were next. The two went drill-for-drill for hours. As Bryant looked to test his newest teammate and push him to the brink of exhaustion. "The loser is the first to black out," he told Butler. Nike will be re-releasing the "Blackout" Kobe 1 Protro this week.

As the newest headliner of the storied Lakers franchise, LeBron James is already looking to also celebrate storytelling through his footwear all season long. For his debut in the purple and gold against the Portland Trail Blazers, fittingly in Nike's backyard, he donned a pair reflecting back on his very first rookie poster with the brand. An epic "King James" themed portrait atop a throne, flanked by a trio of lions no less, the original poster inspired the burgundy and gold tones of the shoe and the fonts and icons throughout.

For his home debut at the Staples Center, James broke out a more coordinating version of the theme, with a purple, knit upper and similar animal-texture heel. According to James' longtime Nike designer Jason Petrie, you can expect to see a flurry of LeBron 16 sneakers throughout the season, hitting on every shade of the rainbow.

"The color rules are whatever," said Petrie. "He's LeBron James, he's gonna do what he wants to do. You can imagine, with zero compliance necessary now, for sure we're gonna flex on that."

While some players wouldn't dare wear a pair of signature sneakers while matched up against their very namesake, PJ Tucker specifically planned out an animal print edition LeBron sneaker of his own to face off against James. According to Petrie, the Nike Basketball team made the "Beast" themed version of James' second signature model as a special gift in 2013 for his annual summer trip to the Nike campus in Oregon. A size 16 pair was given to James, while less than a dozen other pairs are believed to be in existence, making Tucker's size 14 find outlandishly rare.

Check out all of the best sneakers of the opening week from around the league and vote for your favorite pair below. For real-time updates on the feet of the game's biggest stars, join our ESPN SneakerCenter Facebook Group here.