KGO
By by Rick Quan 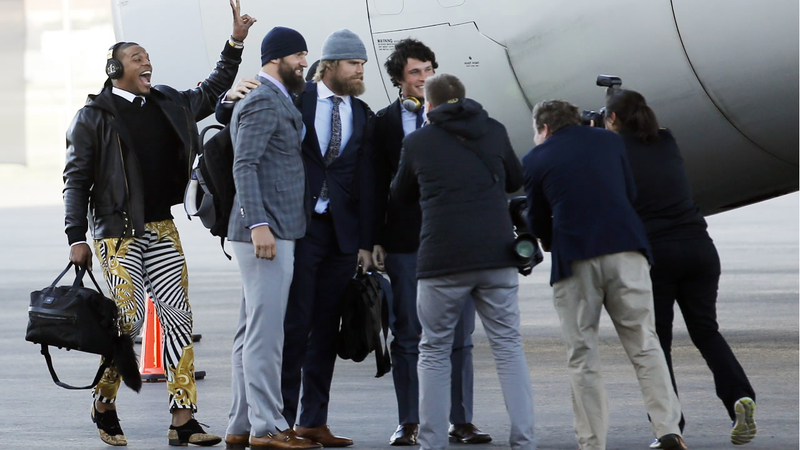 SAN JOSE, Calif. -- The excitement continues to build for next Sunday's Super Bowl as both teams flew into San Jose Sunday afternoon.

The Denver Broncos will face the Carolina Panthers in Super Bowl 50 on February 7, 2016, at Levi's Stadium in Santa Clara, California.

The AFC champion Denver Broncos arrived first around 3 p.m. They are led by future hall of fame quarterback Peyton Manning who is likely playing his final game.

An hour later the NFC Champion Carolina Panthers arrived. They are led by probable league MVP Cam Newton. The Panthers also have their share of local ties. Head coach Ron Rivera was an All American linebacker at Cal, receiver Ted Ginn Jr. played three seasons with the 49ers and defensive end Jared Allen grew up in Los Gatos.

Former Carolina Panther Michael Rucker, who played 9 seasons for the team, was on the tarmac to greet the team.

"[Cam Newton] is going to be at the top physically. He's bigger than me right now and I played defensive line. Playing a quarterback that can run like a deer, that at 3rd down can run like a fullback. And then have an arm that can throw 50 yards down the field, that's a powerful weapon," Rucker said. "I think you're really just starting to see him break out of his shell this last year. He's young and you're going to see a lot more of him.

The fans were not allowed near the tarmac but they showed up anyway.

The Broncos are staying at the Santa Clara Marriott while the Panthers are at the San Jose Marriott.
ABC7 News was not allowed to talk to the players or coaches Sunday. Their availability is being saved for Monday's media day at the SAP Center.