The family tradition of making tamales during the holidays 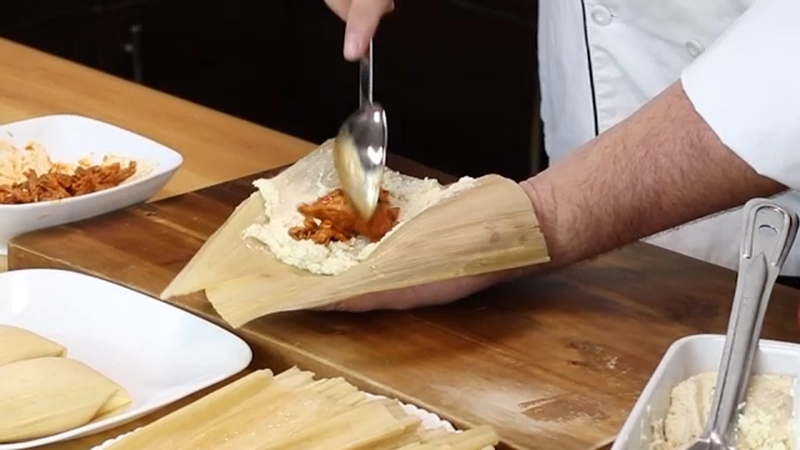 The family tradition of making tamales during the holidays

FRESNO, Calif. (KFSN) -- Tamales are enjoyed year-round but they always seem to taste better during the holidays.

"They taste better because most of the time, you have family around you and family makes everything better," says Vallarta Innovation Chef German Gonzalez.

Gonzalez is an Innovative Chef for Vallarta's 53 supermarkets in California.

He grew up learning how to make tamales as a little boy at his grandma's table. Gonzales says he's seen a non-stop flow of customers.

"Our chicken tamal, pork, are our top sellers and then from there, we have our rajas and cheese, which is our cheese and chile poblano tamal," he said.

Vallarta sells three million tamales a year. A million of those are snapped up during the holidays.

In addition to the traditional favorites, German introduced a pumpkin spice tamale for Christmas.

"It's actually not overwhelming in its sweetness," he said.

Sweet tamales have grown in popularity.

Gonzalez figures half the shoppers who come in prefer to make their own tamales and pick from the different types of masa.

A crowd packed in to pick up ingredients that make their homemade tamales unique, including chile guajillo.

"A lot of customers will take this home and make their own sauce or their own guisado for the tamales," Gonzalez said.

Special attention is paid to the husks.

For many Valley families, tamale-making is a Christmas Eve tradition.

"We also have customers that pick up the masa to make them at home, but they'll buy some of the ones that are ready-made just to eat them while they're making the other tamales," Gonzalez said.