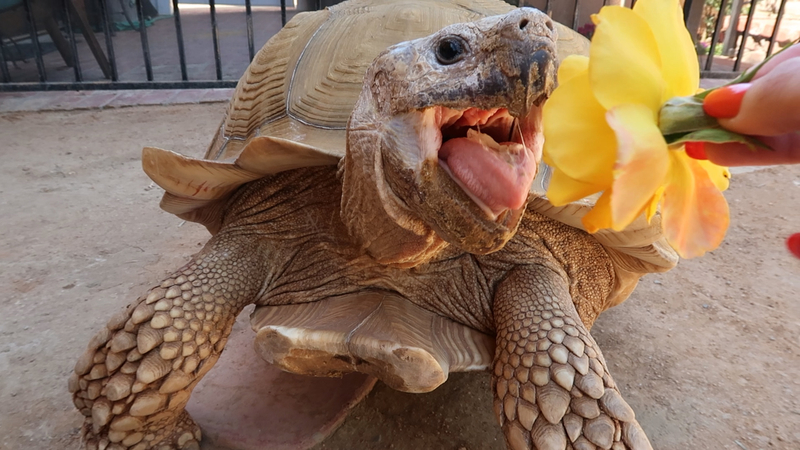 LOS ANGELES -- When Caitlin Doran put a tortoise on her Christmas list as a 7-year-old, she didn't think she'd get one, let alone grasp that if she did she'd have to care for him the rest of her life. But with a few strokes of a crayon, she unknowingly made a life-long commitment that would have a lasting impact for her and her family.

"I definitely wish I was more aware of that. And that's something that I make sure to put forward to other people when they're asking me questions like 'Oh, should I get a tortoise? Are they hard to take care of?" Doran said. "Because they're not hard animals to care for, however, you have to be ready to care for them their entire life."

What was once a heavy lift to provide unabated care for a 175 lbs. tortoise through the variable phases of childhood, slowly but steadily became a source of care for Doran herself.

"Prior to doing all this stuff with Tiptoe, I was in a very intensive job with crazy hours. And now that I'm doing Tiptoe work full-time, it's crazy how much happier I am," she said.

When Doran lost her job at the start of the pandemic, she started noticing videos on TikTok of parents making intricate lunches for their children. She was already making colorful plates of fruits and vegetables for Tiptoe every day, so she began recording it. When she started getting a good response, she came out of her shell and hatched a plan to take her
meals to the next level.

"I started making him crazy meals like tacos with shredded carrots and burgers out of watermelon and squash," Doran recalled. "Pretty much anything that I would typically eat in my day, I 'tortoise-fied' it and made something for Tiptoe, so he could enjoy the good stuff too."

And it's not just Tiptoe who's enjoying the good stuff. Nearly 4 million followers on TikTok are eating up every last bite of what Caitlin and Tiptoe are serving, with 65 million likes and counting on their cooking content.

Doran may be running the social media side of Tiptoe's food life, but she's not the only one invested in creating intricate meals for him.

"My mom is one of my biggest helpers. And her and I together, we plot these food ideas," Doran explained.

"People think that I'm crazy for spending that much time making food for my animal. Meanwhile, my mom and I were crazy about our animals anyway, so it's just another day in the life for us."

From 19 years of bonding, Tiptoe is more than a source of levity for the Doran family. He's an inseparable part of their lives. And according to Doran, that's never going to change.

"Tiptoe has been with me my entire life. He was at my elementary school graduation middle school, high school, college. Any big milestone in my life, Tiptoe has been there," Doran said.

"At this point in my life, I am so comfortable with the fact that I'm going to have Tiptoe for the rest of my life."