Dozens filled the street over the weekend to peacefully protest the Tower Theatre's pending sale to Adventure Church.
KFSN 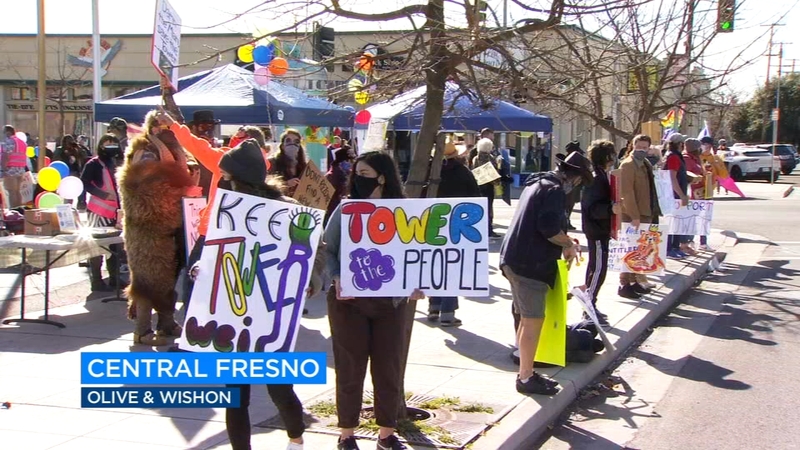 Save the Tower Theatre Demonstration Committee put on the event on Sunday at the corners near Wishon and Olive Avenues.

The group has been protesting in front of the theater every Sunday for several weeks to stop the sale of the landmark. They say the potential re-zoning of the building and surround blocks would threaten small businesses in the district.

"What we are against is losing something precious to our neighborhood. This is not just a building. It is an icon," said Alicia Rodriguez, demonstration organizer. "This represents a district that is LGBTQ friendly. It's one of the only safe spaces we have, and taking that away can affect local businesses."

A group of counter protesters in support of the sale to Adventure Church also stood outside the theater on Sunday.

The peaceful protest comes after a lawsuit was filed Friday by the Sequoia Brewing Company owners to throw a hurdle in front of the sale.

The owners said their lease agreement with the theater's owners gives them the right to buy their property if it's up for sale.

The lawsuit was set in motion after celebrities Sarah Silverman and Audra McDonald spoke out on social media to support the Save the Tower Theatre group's wishes.