Investigators say they believe there may be more victims. Anyone with information is asked to contact authorities.
KFSN
By Elisa Navarro and Alyssa Flores 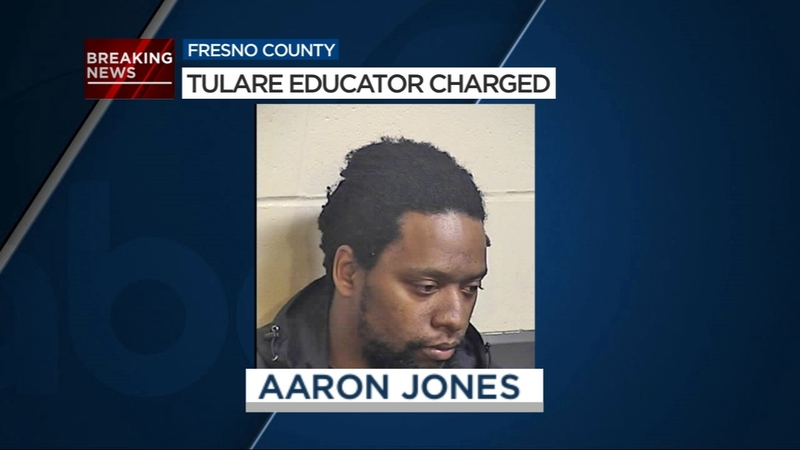 For one Fresno County mom, who is choosing to remain anonymous, disturbing social media messages and texts between her 12-year-old and his tutor went on for months without her knowing.

It wasn't until she picked up his phone over the weekend that she discovered the inappropriate messages.

A Tulare educator is accused of sharing child pornography with a student he was tutoring in Fresno County, according to the sheriff's office.

"I felt sick to my stomach," she said. "I felt physically ill seeing all of these images. Every single thing that Aaron was sending was an inappropriate message -- even a joke about being a pedophile."

Jones is now facing a felony charge of distributing child sexual abuse material to a minor.

He was placed on administrative leave from his job as a coach at the College of the Sequoias in Visalia and as a homework lab aide at the Tulare Joint Union High School District.

Sgt. Diana Trueba Vega with the Fresno Police Department says it's most common for predators to come in the form of familiar adults that play trusted roles in kids' lives.

She urges parents to get ahead of the danger to their children with a conversation, making it clear that they can talk to you about any interaction they have that makes them uncomfortable.

"Talk to our children and explain to them that there are people that are going to try and make contact with them through those avenues," she said.

Vega says security and monitoring apps on smartphones and devices are a great resource to stay on top of the communications that go in and out of your kids' devices.

Officials say if you find anything that seems inappropriate, report it to law enforcement immediately - even if you're unsure that it crossed the line.

"Report any instance, even if they believe it might not amount to a crime because an officer might realize that maybe it is a crime," Vega said.

Now, the anonymous mother has a message to parents: supervise all online interactions between your kids and people - even those you do know.

"This really proved to me that you never know who it could be or when it could happen," she said.