The USS Nimitz was officially 320 days at sea, which makes it the longest deployment since the Cold War.
KFSN
By Jason Oliveira 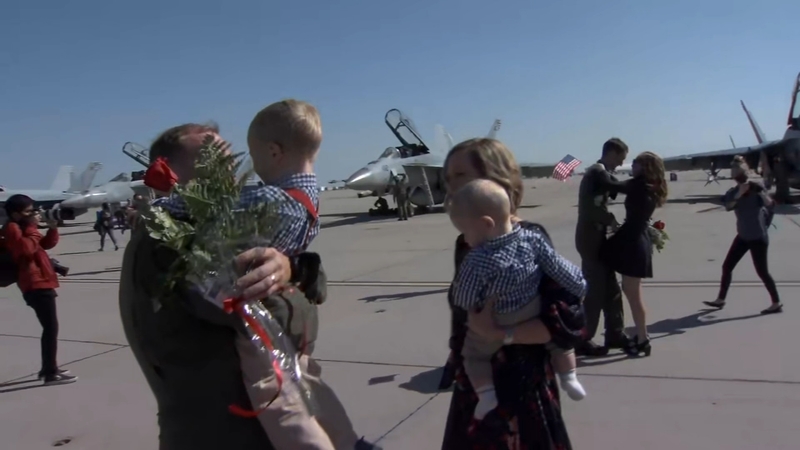 LEMOORE, Calif. (KFSN) -- The wait is finally over for many families after Thursday's homecoming at the Lemoore Naval Air Station.

Nearly a year's worth of anticipation exploded with emotions for the families of the brave sailors who returned home to their loved ones at Lemoore Naval Air Station.

When Jennifer Hoffman said goodbye to her husband ten months ago, she assumed she'd have him back home for the holidays.

But when his deployment aboard the USS Nimitz Carrier Strike Group was extended multiple times she knew she'd have to carry on a little longer for her family, a family that had grown from three to four during his time serving our country.

"We thought first they'd be home for Christmas and that got pulled out from underneath us, and we thought New Year's. It's just been a lot of hang on and wait, patience, patience and more patience," says Jennifer.

But the anticipation turned to excitement as the Fighting Redcocks attack squadron approached the waiting families.

"I see a brand new little guy. I can't doubt he's mine and I'm just so happy to finally meet him and actually be reunited with my family," says Andrew.

The couple is looking forward to getting back to family life and adjusting to a new everyday routine together.

"I'm just looking forward for some time with the family and taking some time off. We have a camper and we've been talking about going camping and that's socially distanced," says Andrew.