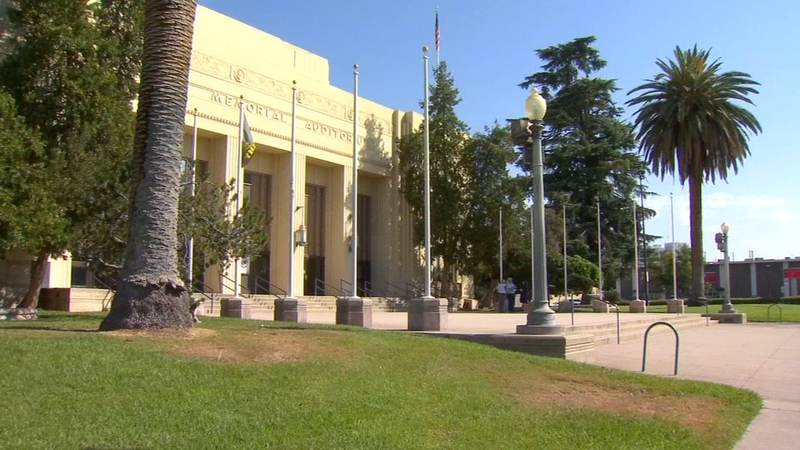 FRESNO, Calif. (KFSN) -- The flag poles outside the Veterans Memorial Auditorium in Fresno are mostly bare these days after being stolen July 5.

"We noticed the flags had disappeared, all except the one that was Army, and we have no idea who took them, but it was shocking that someone would bother to do such a thing," said Bob Specht

Veteran Bob Specht is CEO of the Veterans Memorial Museum, which is housed in the building.

He's upset over the recent crime and says the Avenue of Flags has been there for 30 years as people come into the museum.

"They represented all the branches of the service: the KIA's, prisoners of war, purpleheart, Marines, Army, Navy and the Air Force," Specht said.

In total, eleven flags are missing. One was later put back up but was left damaged.

The Fresno Police Department was able to see some surveillance video from a nearby bus stop from July 5 around 5 am.

"(In the video, the suspect) very nonchalantly starts climbing the flag poles and starts taking the flags down. There are other people at the front steps of the buildings. No one is doing or saying anything," said Fresno Police Officer Felipe Uribe.

Police believe the person or persons responsible could be homeless.

Museum officials say they've had to use their limited funds to help pay for the cost of replacing them, which is estimated at $500.

"Financially, we are a non-profit. We don't have a lot of funds to spend on redoes," Specht said.

As for the museum, they've been hit hard by the pandemic, but their mission continues.

"This is a national treasure. This is not just an every other town military museum. This is the legion of valor for the United States of America. Those fellows that have won the Medal of Honor presented by the president. We are home base. So it's a special place," said Michael Harris, deputy director of Veterans Memorial Museum.

History and honor that they want to uphold for Valley residents and the generations that have served.