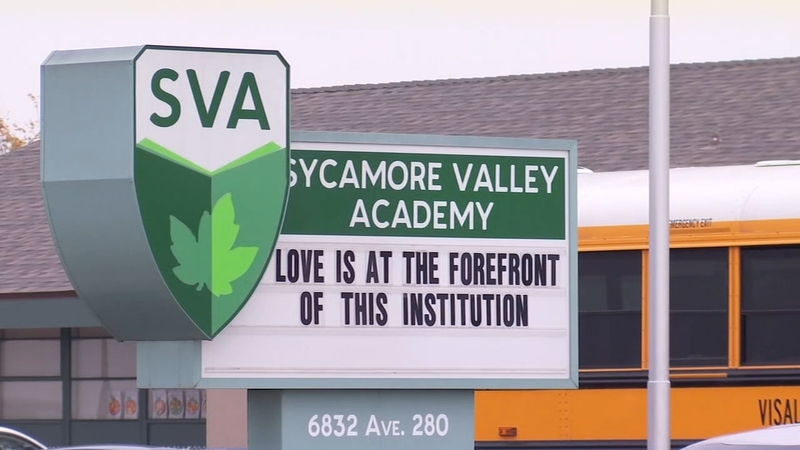 VISALIA, Calif. (KFSN) -- Kristi Mellow is a mother of four and a part of the Sycamore Valley Academy community.

She was shocked to hear the Tulare County Sheriff's Office arrested a 14-year-old student from the school on Monday, who is accused of threatening to kill two classmates.

"My first reaction was obviously, that's my kid's school," she said. "Because we are a private little community out here, we are friends. So it was a little nerve-racking."

Mellow talked about the incident with her girls who say they've always felt safe.

"I felt as safe as I would be at home," one of the daughters said.

"I am glad the school dealt with it quickly and that the threat was taken seriously," Mellow said.

One of the students did not go to school because of the threats.

Deputies were made aware Monday before noon. But this is just the latest in a recent series of similar crimes. Sanchez says the department has investigated about a half dozen credible school threats in the county in the last few months alone.

"Across the nation, there has been an increase of threats made at schools," he said. "We want to make sure the public knows we take these threats very seriously. If you see something, say something. "

He says during this latest investigation, they learned the student possibly had access to firearms.

A search warrant took place at the boy's home and no weapons were found.

Superintendent Donya Ball released the following statement saying, "Threats made of any nature are taken incredibly seriously and investigated thoroughly. The SVA campus is safe and we are thankful for our strong partnership with the Tulare County Sheriff Department who continue to conduct their investigation."
Report a correction or typo
Related topics:
visaliaschool threat
Copyright © 2022 KFSN-TV. All Rights Reserved.
TOP STORIES
Man charged with murder of 2-year-old whose father died a year earlier
How reliable are rapid tests? Dr. explains when to depend on results
Is there home appraisal bias in Fresno? Professionals weigh in
Housing Watch: Million-dollar homes at Ventana Hills in Fresno County
Valley Children's Hospital delaying some non-urgent surgeries
Good Sports: Fresno woman gains recognition with indoor rowing
Valley ag business continues to feel impact of supply chain issues
Show More
Family of 5 displaced after house fire in southwest Fresno
Merced police searching for missing 87-year-old man
Website for free COVID tests is here. How does it work?
Biden, 1 year in, says nation weary from COVID but in a better place
Man suffered severe burns after explosion at Table Mountain Casino
More TOP STORIES News