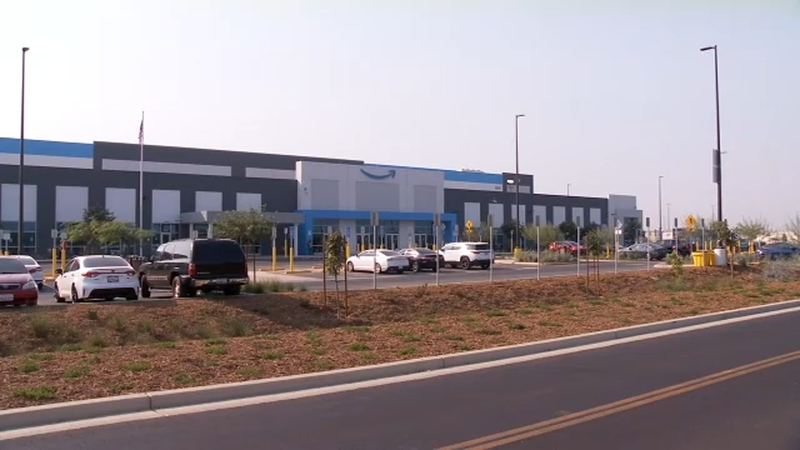 VISALIA, Calif. (KFSN) -- A thousand people have already been hired to work at the new Amazon fulfillment center on Kelsey Street near Riggin Avenue in Visalia.

But the company still needed to add 200 more people to prepare for the busy holiday season.

A surge in online shopping has allowed Amazon to expand its services.

Larger items that people order from Amazon have started to be shipped out of a 1.3 million square foot warehouse in the South Valley.

General Manager Carlos Avelar explained, "We are a non-sort building, so that means we handle medium to larger items. So you can think of anything from a box of diapers to patio umbrellas. The one in Fresno has a lot of smaller things."

Avelar noticed most of his new employees were from Visalia, Fresno and Porterville.

Entry-level salaries start at $15.50 an hour with paid vacation and benefits, which is what many workers have been looking for.

Avelar said, "The opportunity for growth, right. A lot of them actually left other jobs to come work with us here at Amazon in Visalia and that was a big thing they talked about. Hey, I do want the job but I also want the opportunity to grow further."

Many people lost their jobs during the pandemic, so Visalia Mayor Steve Nelsen was thrilled to see Amazon bring 1,200 jobs to the area.

Nelsen said, "Jobs are paramount for anybody who has a family or is looking at a career, and the kind of companies that are attracted to our industrial park are career-type positions."

UPS was also located in the same industrial park as Amazon. Ace Hardware will also soon build a distribution center at the site.

The city has been aggressively pursuing businesses looking to expand.

A lack of warehouse space in Fresno has benefited Visalia, which was also situated along the preferred Highway 99 corridor.

Nelsen agreed, "I think you're right. We have now been favorably looked upon by a lot of distribution companies. We've always been shovel ready."

The city has also now made bus routes available for workers who needed to get to UPS and now Amazon.