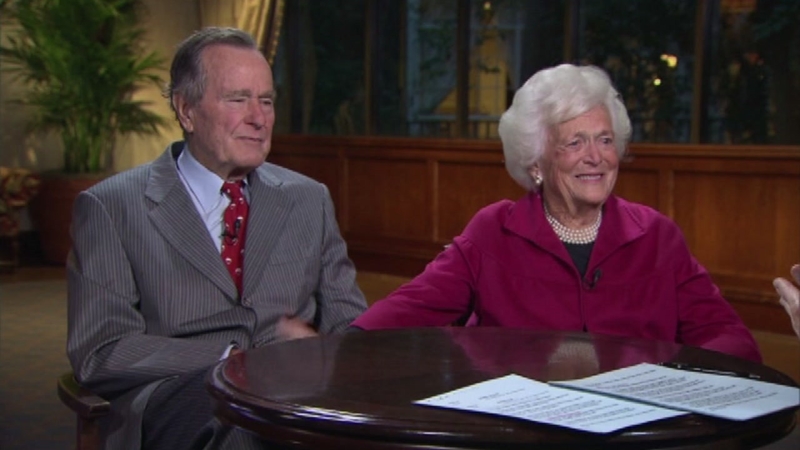 HOUSTON, Texas -- Former first lady Barbara Bush has been in and out of the Texas Medical Center over the past year.

She has been in declining health for some time and on Sunday, the Bush family spokesperson announced that the Bush matriarch is no longer receiving medical treatment.

The statement released by Jim McGrath said, in part:
Following a recent series of hospitalizations, and after consulting her family and doctors, Mrs. Bush, now age 92, has decided not to seek additional medical treatment and will instead focus on comfort care. She is surrounded by a family she adores, and appreciates the many kind messages and especially the prayers she is receiving.

"It will not surprise those who know her that Barbara Bush has been a rock in the face of her failing health, worrying not for herself -- thanks to her abiding faith -- but for others," McGrath also said in the statement.

That abiding faith has been necessary over the last few years, for both her health and that of former President George H.W. Bush.

In the past, the Bush family has said Mrs. Bush suffers from congestive heart failure.

"It's a general medical term that we use to describe a set of conditions where the heart becomes less efficient at being a good pump," said emergency physician Doctor Michael Chang. "The pump becomes weaker and weaker."

Dr. Chang, who does not treat anyone in the Bush family, says Mrs. Bush's health is exacerbated because she has the heart condition as well as chronic obstructive pulmonary disease, or COPD, which affects the lungs.

She has also coped with Graves' disease for many years.

"If you get the heart and lungs both involved, obviously, it's that much worse," says Dr. Chang.

The decision by Mrs. Bush and her family to focus on comfort care makes sense to Dr. Chang.

"The best interest of the patient is not always to extend the life at all costs," he said. "Ultimately our job is to make sure our patient's wishes are respected, and we do the best for the patient as well as their families."

Both Mrs. Bush and her husband live in Houston. As they have aged, they have spent considerable time in and out of the hospital.

A few years ago, Mrs. Bush had open heart surgery to repair a valve. It was successful.

Most recently, in January 2017, both she and President Bush were hospitalized. She was being treated for bronchitis while he was admitted for a bout of pneumonia.