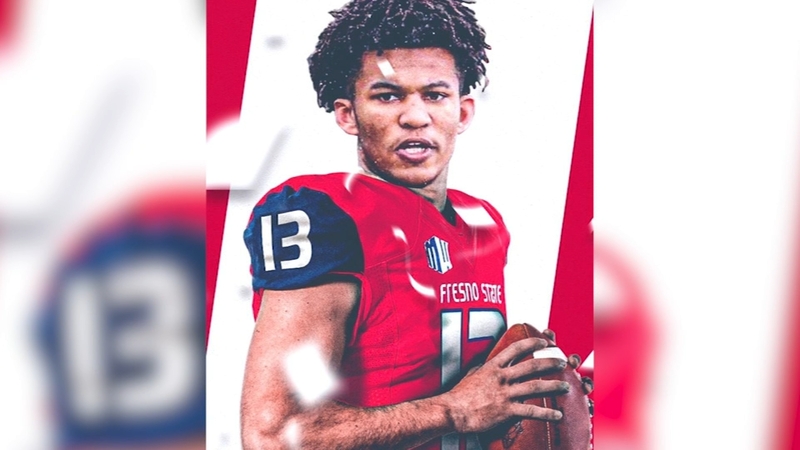 FRESNO, Calif. (KFSN) -- "This guy is dynamic personality-wise, leadership-wise, he has the motivation to be great," says head coach Kalen DeBoer.

Ranked as the No. 24 dual-threat quarterback in the country, Jaylen Henderson expects to compete for the starting job next year.

"You ask Jaylen, he's coming in ready to go, that's the type of mindset he has," DeBoer said. "Between the two of them, we have some dynamite passers and competitions. I know Jaylen is going to come in swinging. He's eager to get here and get to work. "

The Chaminade High School senior totaled over 3400 yards of offense his junior year. He models his game after the NFL's 2019 most valuable player.

"From Fresno State, it would be Derek Carr, but my favorite quarterback is Lamar Jackson, that's my favorite team," Henderson said.

Jaylen grew up going to Fresno State football games. He is the younger cousin of former Bulldog and NFL player, Chris Carter.

"When I was young, I used to go to a lot of his games," Henderon said. "I remember the stadium used to always be jammed packed. It was always live every game, that's something I can envision myself playing with the stands full. Hopefully, he can come to the games. That would be a special moment for the both us."

Jaylen and his parents run a non-profit in honor of his sister, who passed away at just 13 years old from Leukemia. The 4.0 student wants to major in business to help the organization grow and bring more national awareness to childhood cancer.