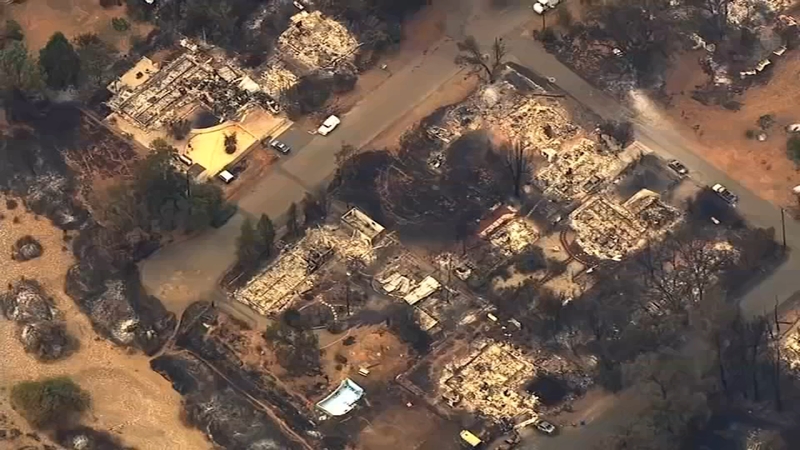 SAN FRANCISCO -- It's been nearly a year since the Fire Victim Trust was created to pay PG&E victims of the 2015 Butte Fire, 2017 North Bay Wildfires and the deadliest 2018 Camp Fire, but many of those victims say they're still waiting. Meantime the trust has spent more than $51 million, including hefty salaries for those in charge of the trust.

Steve Culleton remembers the Camp Fire in such detail it's as though he could still smell Paradise burning today.

"This was the perfect storm," he said. "The winds were erratic. They were blowing in every direction. You could see the embers and the flames just blowing sideways. The fire jumped the canyon. It was burning at us from both sides."

He went on to say, "We all thought we were going to die."

TIMELINE OF TERROR: The evacuation of Paradise from beginning to end
EMBED More News Videos

The blaze destroyed nearly 14,000 homes and left at least 85 dead with many still unaccounted for.

Culleton rescued his daughter Bridgette from her home.

"It's kind of hard to think about it now, but dad was there for me and he was able to keep me calm and we were able to just trudge through," she said. "I mean, there's nothing else you can do except for continue trying to get out."

Both Bridgette's rental home and the home Steve Culleton and his wife owned were destroyed. The fire sparked by PG&E equipment was California's deadliest and most destructive fire.

"In that type of fire, it's like a blow torch," Steve said. "Nothing withstood it. It's a pile of ashes."

He had fire insurance, which enabled him to rebuild. But his daughter and many others did not.


"We know of 350 victims of the fire that are living on their property in trailers waiting for the settlement," Steve said.

While pointing out a trailer he went on to say, "That's the neighbor across the street the closest trailer that was a house. Everybody is waiting on money."

According to court documents, the trust is funded half with cash and half with PG&E stock which means the value of the trust constantly fluctuates.

"This is the biggest, most complicated case I have ever been involved in," Yanni told the ABC7 News I-Team.

Woodrow: "Is it fair to say the buck stops with you in that respect?"
Yanni: "That would be right."

BrownGreer staff members' salaries, along with Justice Trotter's salary and Cathy Yanni's salary, are all paid for by the trust from the same pool of money that pays fire victims.

According to court documents, Justice Trotter charges $1,500 an hour.

"Lawyers who are lawyers as long as I've been a lawyer with my background those are the kind of rates that we charge," said Yanni.

According to the Trust there are 67,170 individual claimants. So far the trust has paid less than 10,000 of them. The bulk of which received a preliminary payment up to $25,000. Only 334 fire victims, less than half of 1% of fire victims have received a 30% partial payment of their total claim.

The Camp Fire has killed 86 people and at one point left hundreds of people unaccounted for. Here's a look at other deadly wildfires in California history.

Meantime, according to its annual report, the trust spent more than $38.7 million in operating expenses from July 1, 2020 to December 31, 2020. That's in addition to $12.7 million spent to set up the trust, as first reported by KQED and independently verified by the ABC7 News I-Team with PG&E, and likely millions of dollars in operating expenses not yet reported by the trust this year.

"I don't know what they're doing," Steve said. "The woman in charge of the thing is getting over a thousand dollars an hour and she last two weeks ago was in Hawaii on vacation and people are sitting here with no place to live."

Yanni admits she went to Hawaii in March, but says she was working the entire time.

"I can actually understand they're waiting and wondering what's going on and they're concerned if I'm the person who's approving the claims that maybe I wasn't doing that and in fact I was I approved claims the whole time I was there," said Yanni.

She says she did not expense any part of her trip to the Trust.

Who will also cost money.

"We're all fearful that the trust people, this woman on vacation or any of the people that are getting these exorbitant salaries to manage this trust and to do this thing," Steve said. "We hear that that money is coming out of the trust. I'm telling my lawyer go sue the trust."

"Will there be enough money to pay all of the claimants," asked Woodrow.

"Oh yeah definitely there will be," said Yanni.

VIDEO: How are wildfires started? A look at the causes of some of the worst in California history
EMBED More News Videos

These are the five most destructive wildfires in California history when measured by the number of structures destroyed.

"Absolutely, I don't have any doubt about that," she added when asked again.

Yanni says the goal is to keep administrative costs around 1% but it's not clear how the trust plans to do that.

"If the administration stays at 1%, there's 99% to pay for other things which I hope is paying the claimants," said Yanni.

Culleton isn't ready to hang his home on hope.


"This all could have been avoided if PG&E had just kept with keeping things up," said his daughter Bridgette.

Yanni has a message for the Culletons and others who are waiting.

"Mostly I just want people to know that everyone, myself and everyone who works with me, they are totally devoted to getting the fire victims paid," said Yanni.

For that, Bridgette Culleton says she's grateful. It's just a matter of when.

"I try to just keep looking forward," she said.

Since her interview, Bridgette Culleton has received and accepted her claim determination from the trust. Steve Culleton has not.

Take a look at more stories by the ABC7 News I-Team.