WLS
By Will Jones 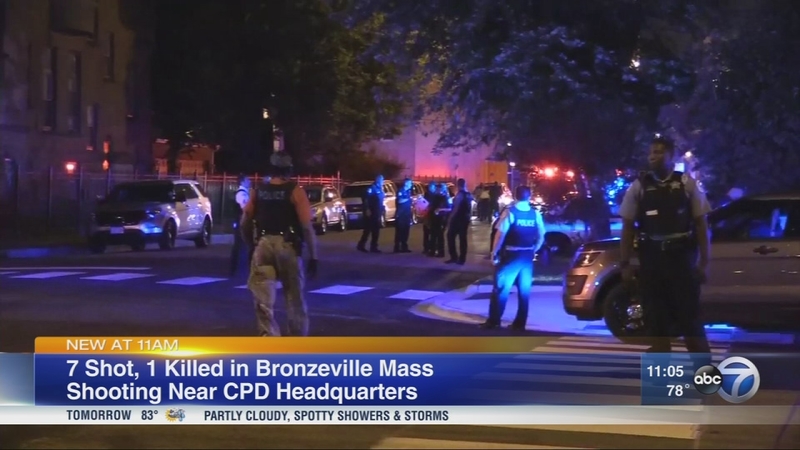 CHICAGO -- Seven people were shot, one of them fatally, in a mass shooting Tuesday night about two blocks from Chicago police headquarters on the city's South Side. Five of the wounded are women.

The victims were standing on the sidewalk just after 10:30 p.m. when a group of males walked up and fired shots from the corner of the block, police said. An earlier fight at a nearby park may have contributed to the violence, investigators said late Wednesday morning.

Alfred Mitchell Jr., 28, was shot in the back and pronounced dead at Northwestern Memorial Hospital, police and the Cook County medical examiner's office said. He lived in Chicago's Fuller Park neighborhood on the city's South Side.

"He was very friendly, outgoing. You know, he laughed, we spoke about old times and everything. He wasn't a bad person. He was not out here doing anything that you could say, 'OK. Well, what he did caused this to happen,'" Cooper said.

A seventh victim, a 30-year-old man, suffered gunshot wounds to the right leg and later showed up at Northwestern Memorial Hospital, police said. His condition was also stabilized.

Investigators said one of the male victims has a history with police and has been shot before. He was wounded in a shooting in 2011. Detectives are working to determine whether he was the intended target or if the shooting stemmed from an argument.

The investigation is ongoing. The 2nd District increased patrols in the area Wednesday. No one is in custody.

The shooting incident comes after Chicago police reported 74 homicides in the city during the month of July.