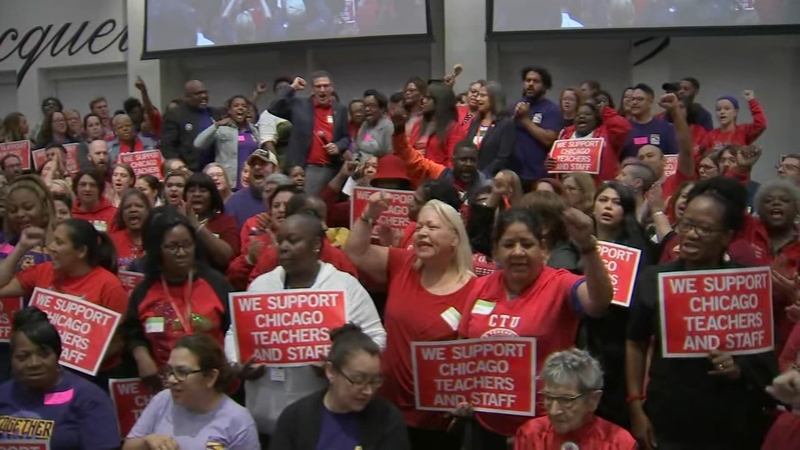 CHICAGO -- Schools are closed Monday after Chicago Public Schools and the Chicago Teachers Union failed to reach an agreement over the weekend.

The city's school district said both classes and after-school activities are canceled Monday as the Chicago teachers strike heads into its fifth day. Monday will mark the third day that schools have been closed over the strike.

CTU and SEIU are currently on strike, which means classes and after school activities are canceled tomorrow, Monday, 10/21. School buildings will be open for students who need a safe place to stay during the day. https://t.co/q0nQPR7VLL pic.twitter.com/SgxWpUqBR6

After meeting behind closed doors for most of Sunday, negotiators for the teachers' union and the school board said they're making progress on a deal.

Sticking points in negotiations remain over a number of issues, including hiring of support staff and the length of the contract.

The threat of the Illinois High School Association kicking nearly 100 CPS schools out of Tuesday's Class 2A and 3A state playoffs looms.

"We have 14 seniors on our team. We see this as an opportunity to finally, hopefully win something in state, and we want to be given that chance to compete for a regional title," McCarthy said.

Joe Trost, the founder of Pepsico Showdown, said IHSA has an opportunity to be a hero for thousands of student-athletes and give them a chance to compete.

The IHSA is expected to announce a decision Monday afternoon.

The Chicago Teachers Union will return to the picket lines outside schools beginning Monday at 6:30 a.m.