Police look for suspects who attacked CHP officer in Fresno 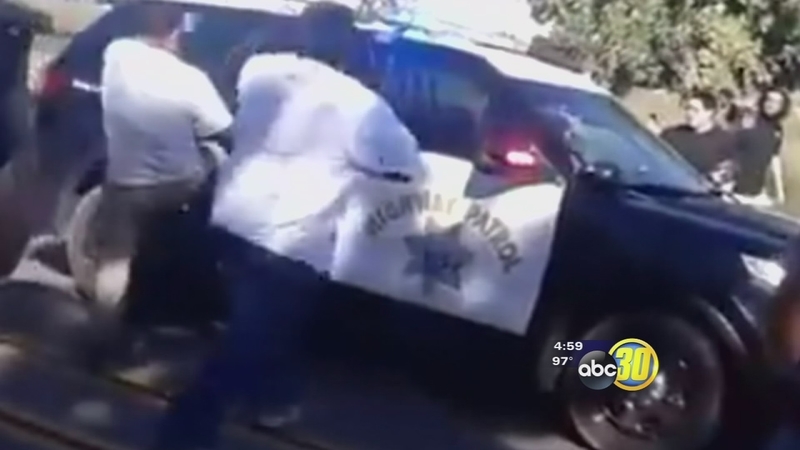 POLICE LOOK FOR SUSPECTS WHO ATTACKED CHP OFFICER IN FRESNO

FRESNO, Calif. (KFSN) -- Fresno Police are still trying to track down the suspects who attacked a CHP officer in his car.

"In all the time I've been in this department, 37 years, I've never heard of anything like this happening," Dyer said. "Extremely brazen."

The Fresno Police Department is using cell phone video to try to ID the people who attacked a CHP patrol vehicle as an officer sat inside. The group caused $12,000 worth of damage as a result of several broken windows and large dents.

"We're going to identify as many people as possible that were involved in this incident and we're going to arrest them take them to jail and work with the DA's office to prosecute them and make sure they're prosecuted on some serious felony charges," Dyer said.

The attack happened Sunday afternoon at the intersection of North and Orange Avenues in southwest Fresno. The officer was patrolling the area when he noticed a large group of people blocking the roadway as they watched cars driving recklessly in the streets. The officer tried to stop one of the vehicles when the cruiser was attacked with him inside."

"Fortunately, he was not hurt," Dyer said. "Had he gotten out of that vehicle I'm not sure what would've happened. He may been put in a position he had to use deadly force."

Detectives are now scouring social media and examining a viral video for anything that leads to an arrest.

"There were some from the Bay Area that came in," Dyer explained. "But a significant amount from Fresno and the outlining areas that were involved in this."

"If there are individuals out there who are this brazen to do this to a CHP officer, they'll do it to another citizen," he said. "And we have a responsibility to prevent this type of anarchy in our community and that's why we take this so serious."
Related topics:
fresno southweststreet racingcalifornia highway patrolfresno
Copyright © 2022 KFSN-TV. All Rights Reserved.
FRESNO
Pressed opens in North Fresno
Pepe Aguilar coming to Save Mart Center in Fresno
Fresno's Old Water Tower will now be home to Frida Café
"National Wear Red Day".
TOP STORIES
TX school shooting leaves at least 19 children, 2 adults dead
Pedestrian fatally run over by farm labor bus in Dos Palos
Reaction in Central California following Texas school shooting
Uvalde school shooting: What we know about 19 kids, 2 teachers killed
Dozens arrested in sting operation targeting violent crimes in Fresno
Suspected DUI driver involved in Fresno hit-and-run crash arrested
California moves toward allowing lawsuits over illegals guns
Show More
2 hospitalized after shooting in east central Fresno, deputies say
Video shows alleged hit-and-run collision with tow truck driver
Watch Steve Kerr's raw, emotional plea after Texas shooting
Matthew McConaughey: 'We must do better' after massacre in hometown
1st possible CA case of monkeypox believed to be in Sacramento
More TOP STORIES News