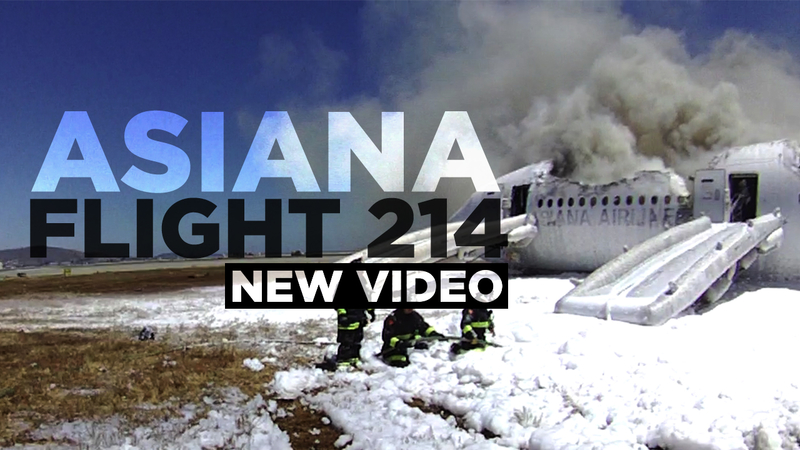 SAN FRANCISCO -- We have a new perspective on the crash of Asiana Flight 214 five years ago, from a crane operator high above San Francisco International Airport. He can be heard seconds after impact saying, "Look at the, look at the plane crash at the end of the runway!" ABC7 I-Team Reporter Dan Noyes has just obtained that video and others that raise new questions about the actions of first responders and their bosses that day.

On July 6th, 2013, Asiana Airlines Flight 214 flew from Incheon, South Korea to San Francisco and crashed after the jet hit a runway seawall. Here's a comprehensive look at one of the Bay Area's biggest breaking news events.

Someone dropped a package at ABC7's front desk for Noyes. They didn't leave a name or contact info. It contains internal fire department documents and a thumb drive with hours of video that lead to one very important question: do public officials have a duty to tell you the truth?

The anonymous source provided airport surveillance videos of Asiana Flight 214 cart-wheeling down the runway. In the clips you can hear Air Traffic Control radio:

The video was shot by a crane operator high above the scene:

Crane Operator: "I saw him coming in low, and his tail, he didn't quite make the runway."

Firefighter: "You know you got a body right here?"

It captures the moment Johnson realized fire crews made a terrible mistake.

A Chinese couple that survived the Asiana crash at SFO shared their journey exclusively with ABC7 News Anchor Kristen Sze.

Johnson: "She got run over."
Firefighter: "You can see the tire tracks right there, too."
Johnson: "I mean, s*** happens, you know?"

The San Mateo County coroner later concluded she was alive before the trucks ran her over, and the videos show a timeline of mistakes, confirmed by NTSB documents:

At 11:28 a.m., the aircraft came to a stop, the chutes deployed and passengers scrambled to safety.

At 11:36, firefighters see Ye Meng Yuan in a fetal position. They assumed she's dead without ever touching her or taking vital signs. They didn't move her to safety or put up warning markers. They directed Rescue 10 around her.

The driver then began foaming the plane, and apparently forgot Ye wa there.

And at 12:01 p.m., Rescue 37 sprayed the plane and departed, also rolling over Ye Meng Yuan and crushing her head.

It took the battalion chief nearly two hours to tell the command staff what happened.

Johnson: "Somebody got run over. One of the passengers on the airplane, clearly one of the fire department rigs ran over her."
Tom Siragusa: "What?!"
Johnson: "Without a doubt, without a doubt."

The next stop was to inform SFFD Chief Joanne Hayes-White.

Johnson: "Chief, there's a woman there who's been run over by one of our rigs."
Hayes-White: "Is it near one of the rigs now?"
Johnson: "No, this happened earlier."

Hayes-White then said she wanted to see the body.

Hayes-White ordered the rigs to remain in place, so the investigation could begin. Yet, at news conferences that same day, Hayes-White is heard saying that they "made valiant efforts."


The next day she did not mention the terrible accident.

Instead she said, "It was a well-coordinated effort. Training totally pays off."

In fact, Hayes-White took it a step further.

"Everything worked as best as it possibly could've yesterday," she said.

Noyes: "Was that accurate, from what you knew?"
Hayes-White: "What I knew, yes, it was."

The I-Team questioned Hayes-White before a San Francisco Fire Commission meeting last week, and she defended not telling the public the whole story.

It was only after reporters' questions the following day that she confirmed the unthinkable -- an airplane passenger run over by a fire truck.

Stanford Political Science Professor Bruce Cain has taught classes on ethics. It's his opinion that Hayes-White's actions were "irresponsible" and he says, "She was trying to cover up what was going on, trying to make a situation seem rosier than it really was."

As the one-year anniversary of the Asiana crash approaches, staff at SFGH are reflecting on the past and looking toward the future.

And Cain tells us that could undermine people's faith in government.

"What she should have done at the very least was to say there was an incident," Cain adds. "We're investigating why it happened and what our responsibility for this person's death was."

Noyes: "I have talked to both current and former public officials and ethics professors who say this is a clear-cut case that you should have been upfront with the public."
Hayes-White: "And it's easy for them to stand there and say that when again it was under investigation."

The chief tells us she wanted to wait until the investigation confirmed what happened, even though she saw the victim's remains in the tire tracks.

We reached out to that battalion chief who wore the camera on his helmet through his lawyer. He still works for the department, but he did not return my calls.