Fresno police say suspect Jaime Fonseca's child was in his car with him during the whole ordeal and was safely turned over to family members.
KFSN
By Sara Sandrik and Alyssa Flores 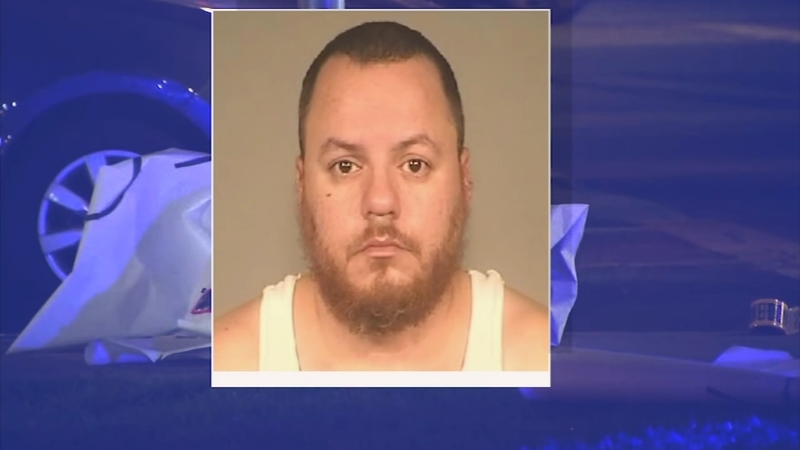 FRESNO, Calif. (KFSN) -- A cell phone video is now a key piece of evidence in the investigation into a violent encounter near River Park Shopping Center just after 6:30 Wednesday night.

But representatives from the Armenian community are now calling it a hate crime.

They say after a verbal exchange, he grabbed this wooden baton and a claw-style knife from his car and started slashing their banner.

"Once that happened, once he destroyed their sign, someone tried to restrain him and the struggle was on," said Fresno Police Capt. Mindy Casto.

Three men between the ages of 18 and 26 were cut with the knife, sending two of them to the hospital for stitches. Police say Fonseca drove away from the scene, ramming into at least one car. They tracked him down at his home about 12 miles away on Brown Avenue with the help of witnesses who took photos of his license plate.

"Officers did recover the weapon and some of the clothing the suspect was wearing. He was taken into custody without any incident, and the charges are at this time - assault with a deadly weapon other than a firearm, and some weapons charges," Casto said.

Casto said Fonseca's child was in his car with him during the whole ordeal and was safely turned over to family members. She also said investigators have interviewed at least 30 people and believe traffic rage was the only motive for the attack.

However, representatives from the protest sent Action News a statement saying that Fonseca was degrading Armenians during the confrontation and that this was an act of hate crime.

"We were just trying to get our voices heard because no one is taking actions, and we were doing peaceful protest, and that one guy just made it violent," said demonstrator Katarina Melikian.

Attorney Ralph Torres is not representing Fonseca but reviewed video of the encounter.

"You see an event where someone is really breaking a law - blocking the roadway, but can you get down from your car and confront? There's some leeway there, but you can't grab a club. That's assault with a deadly weapon," he said.

Torres said based on what he's seen so far, self-defense may be a difficult argument.

"You have to have some sort of reasonable belief that you're being attacked after you stop, and those are the legal issues when confronted with the facts," he added.

Fresno police officers were on hand to make sure their message stayed on the sidewalks.

On Thursday evening, demonstrators returned to the same area with flags flying high.

With the call to action heard by drivers passing through and Fresno police officers on hand to make sure their message stayed on the sidewalks, it was a very different scene at the lively but peaceful rally from that on Wednesday.

Demonstrators said it was important for them to go back out there to get their message back on track.

Fresno PD spoke to organizers beforehand about the importance of keeping roadways clear.

"We had a very good discussion about tactics in the demonstration. What their goals were, what our goals were," said Fresno Police Lt. Israel Reyes.

Officers were present Thursday night as the rally carried on.

Rally organizer Samvel Kazaryan says the group will keep demonstrating as long as deadly clashes continue between Armenia and Azerbaijan.

The group says they have been out here almost every night for about a month sharing their message.