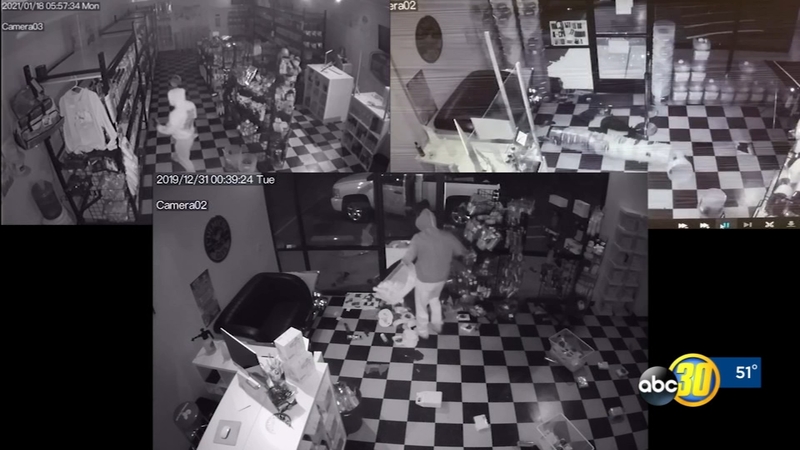 FRESNO COUNTY, Calif. (KFSN) -- Back-to-back break-ins have cost a small business in Fresno County tens of thousands of dollars. The Detail Garage, located on Central Ave near the 99, has been broken into and ransacked three times in the last year or so.

The second break-in was about a year later on January 1, 2021. One man wearing a hooded sweatshirt in a light-colored sedan, possibly a Nissan Altima, entered by throwing a rock through a window.

The business was then broken into a couple of weeks later on January 18. Two men can be seen on surveillance video wearing hooded sweatshirts in a similar colored sedan, again entering by throwing a rock through a window.

Tens of thousands of dollars worth of products have been stolen. The series of crimes have cost the business $50,000 in stolen merchandise, repairs and new security upgrades--which have been implemented after every break-in.

New security bars installed after the third burglary seemed to have fended off would-be thieves just last week on February 18. Two men wearing hooded sweatshirts in a black Chevy Avalanche pickup truck tried to break through the store's glass with a metal bar.

"During this last attempted break-in, they were not able to get in," Liliana said.

She says she believes those that robbed her store knew exactly what they were looking for.

"They are coming in and they are not just grabbing random items. They are taking our top sellers," Liliana said. "They are taking very specific products that are high in value."

Liliana says she has a good idea of what's happening to the merchandise.

"It feels like we are being targeted because our product is very easy to tell on Facebook Marketplace, Instagram, on Let Go, Offer Up," she said. "We have seen our product for sale on there."

The Fresno County sheriff's Office is asking for the public's help in identifying those in the surveillance video and anyone who might be in possession of stolen goods.

"If you have ever seen the person have this product, heard them talk about it, maybe they have advertised it online," said Tony Botti from the Fresno County Sheriff's Office.

Products like the Flex polishing machine are unique to Liliana's store. Officials say to be wary if you see brand new specialty auto care products sold on social media with deals that seem 'too good to be true.'

"As long as the demand is there and people want to buy from the back of somebody's trunk, people will still go out and steal," said Liliana.