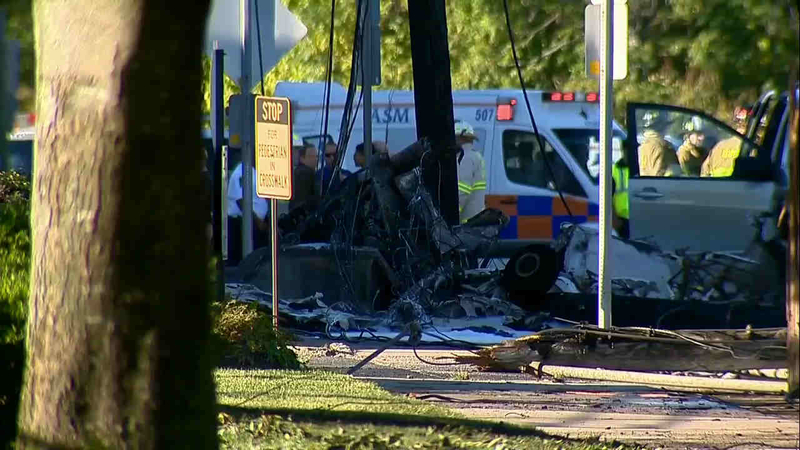 EAST HARTFORD, Connecticut -- The NTSB said its preliminary investigation into a deadly small plane crash near the headquarters of military jet-engine maker Pratt & Whitney in Connecticut indicates that it was an "intentional act."

"In light of that information and in accordance with established procedures the NTSB is in the process of transferring the lead for the investigation from NTSB to the FBI," the NTSB said in a statement on its website.

No details on the motive were released. However, sources said there is no apparent link to terrorism at this point and the investigation is pointing toward suicide.

A student pilot and an instructor were trying to land the Piper PA-34 Seneca at Brainard Airport in Hartford when it struck a utility pole and crashed onto the road around 4 p.m. Tuesday, bursting into flames.

The badly-burned pilot, identified as 43-year-old flight instructor Arian Prevalla, made statements to local authorities as he was rushed to the hospital indicating the crash was not an accident, sources said. The FBI is very interested in those comments and will interview the pilot when he is able to talk to get him to elaborate further.

"It's troubling," East Hartford Mayor Marcia Leclerc said. "But I also know that stories change and information can be skewed. We're waiting for the facts to come out."

There is also indication that the instructor and his passenger/student were in a disagreement before the crash.

The plane had two sets of controls, East Hartford police Lt. Joshua Litwin told reporters Wednesday. He said he didn't know which person aboard was controlling the plane when it crashed. It also wasn't immediately clear whether the student or the instructor was the survivor.

The police chief in East Hartford asked the FBI to assist in the investigation because it happened so close to Pratt & Whitney.

"The path that the plane took could have been much worse. So we're very fortunate in that sense," Chief Scott Sansom said.

Prevalla was initially listed in critical condition but was upgraded to fair Wednesday afternoon.

ABOUT THE STUDENT WHO DIED

The passenger/student, who is believed to be killed in the crash, is 28-year-old Feras Freitekh. He already has a pilots license from 2015. His body remains in the wreckage and has not been positively identified.

He used to live in Orland Hills, Illinois, but currently resides at an apartment in Hartford that was searched overnight.

Three other flight school students also live in that building and were interviewed by investigators. They have been released.

The FBI also looked into Freitekh's background, and learned he was in the country on a student visa to become a pilot, and all available evidence indicates he was legitimately training as a pilot with intent to return to Jordan when his instruction was complete.

"The scene is safe and secure," Deputy Police Chief Brian Foley said. "We want to assure our residents they are not in danger."

Authorities urged people to avoid the crash site as investigators continued their work.

Eyewitness News is following this story. Keep checking back for updates.