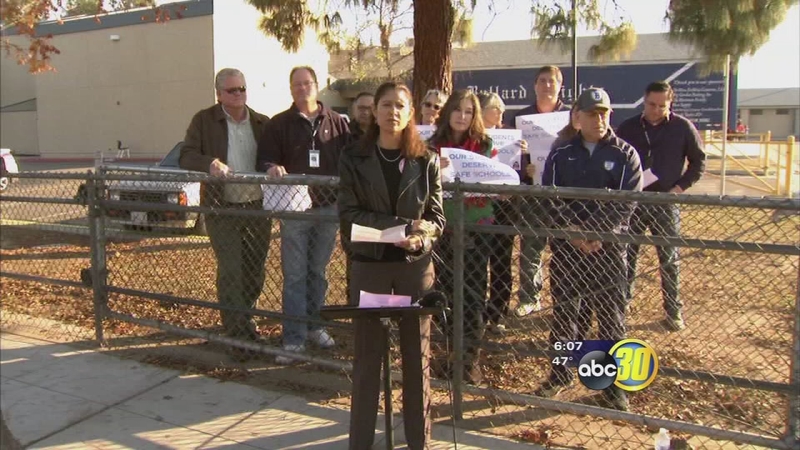 FRESNO, Calif. (KFSN) -- Some of Bullard High School's teachers gathered Wednesday to voice their concerns over, what they say, is the lack of discipline and security on campus.

The gathering comes nearly a month after a teacher there was punched in the face by a student as he was breaking up a fight. "As you might imagine, it caused some teachers to be fearful and it caused some, who weren't fearful, but they were angry because they felt these concerns were long-standing and saw it come to a hit," said Scott Hatfield, Bullard High School teacher.

Bullard High's teachers held this rally because they felt their talks with the district about their concerns over the last four years have gone nowhere. A major concern is student discipline. "We've got situations where people who have serious offenses, things that should be subject to a zero tolerance policy like weapons or drugs or violence, threats of teachers-- they're taken out and the next day they're back in the classroom," said Hatfield.

Plus the teachers claim teachers aren't getting the proper notification by law enforcement when they have a student with a history of violence in their classroom. School district officials deny that's happening, saying there is a regimented process to ensure teachers know their students' disciplinary past. "We appreciate the concerns and we're going to remain committed to discipline at the school, and we are working together, and we're looking forward to working with the teachers to address any concerns that they have," said Carlos Castillo, Bullard High School principal.

Fresno Teachers Association President Tish Rice believes the lack of discipline comes from Fresno Unified's desire to report out better discipline numbers. "Don't get me wrong-- the students aren't the issue. What the educators are saying is this failed system that the district created in order to reduce suspensions and expulsions."