Superintendent's Message - Early Learning Focus
Our children are our most important asset. As our future leaders, they will be responsible for shaping our community and our country's future -- ensuring growth and prosperity for the generations that follow them.
Español | Hmong
Marching on for Cesar Chavez
Students, staff and the community also honored the legacy of Chavez with dancing, essays and a garlanding ceremony at the event, this year held on March 17, its 16th year.
Español | Hmong
Club Members Encouraged to Crack the Code
Codergirlz is a new Fresno Unified coding club for middle school girls who are curious about coding or already love to code.
District Collaborates with Colleges to Improve Transition to Higher Education
Goal is to Increase Bachelor's Degree Completion
Español | Hmong
EMBED More News Videos

Community column - First Five
Babies don't come with parent manuals when they are born. We enter into parenthood with experiences handed down to us from our own parents and from what we've seen from parents around us.
Employee spotlight - Tracy Owensby
Tenaya Teacher uses Humor to Connect with Students
Employee Spotlight - Rosemary Galvan-Reyes
Roosevelt Attendance Clerk is Always Present for Students
Preschool Jump-Starts Student Learning
Enrollment in Fresno Unified preschool has more than doubled in the past four years, with the number of preschoolers learning in district classrooms expected to top 3,200 in the coming school year.
Employer of Choice
Knowledge is Power: Fresno Unified Offers Comprehensive Professional Learning Program
Journey to Graduation Day
Edison Supports Foster Care Student's Goals
Sixth Grade Camp Trips Create Lasting Memories for Students
For the first time in the history of Fresno Unified, all district sixth grade students had the opportunity to go to outdoor school this year. For many students, it was their very first time to the mountains.
Gabby's Room at Heaton helps Students with Autism
Gabby's Room has opened at Heaton Elementary School in a portable classroom, filled with donated and new sensory integration and motor skills equipment to help students with autism.
Senior Leaders Learned to Serve at Edison High School
Being an active member of the Fresno Unified Student Advisory Board (SAB), I genuinely enjoy serving the students of my campus and district.
Banquet will Recognize Fresno Unified Scholarship Winners
A Fresno Unified Scholarship will help Acsa Payan of Duncan Polytechnical High School achieve her dream of attending Fresno State and a career as a teacher.

Graduation Day for Parent University
Nearly 1,000 parents participated in the Parent University Parent Recognition Ceremony on April 14 at Roosevelt High School, which also highlighted Parent University's fifth anniversary. Parent University and its community partners offer classes to empower parents to help educate their children by providing them with information about the resources and opportunities the district offers, and connecting them to the school community and resources in the community at large.
EMBED More News Videos

May 11: Board of Education meeting

May 25: Board of Education meeting 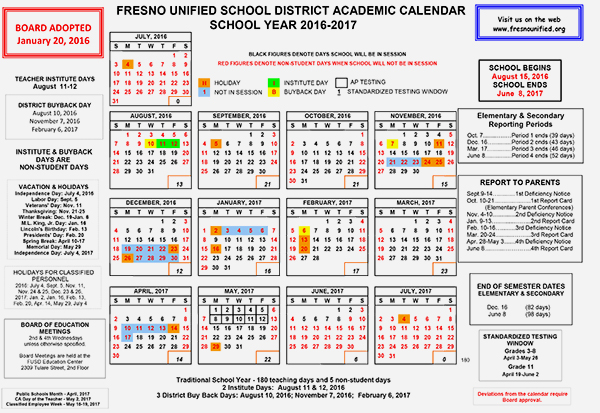 Fresno Unified, AT&T Partner to Teach Students Valuable Lesson
Roosevelt High School students learned firsthand the dangers of distracted driving thanks to a simulator provided by AT&T on campus March 31. Students had the opportunity to take a test drive in the "It Can Wait" simulator, which aims to teach students about the dangers of sending or looking at texts, Tweets, posts or emails while driving.

According to AT&T, seven out of 10 people engage in smartphone activities while driving. Texting and emailing are still the most prevalent. But other smartphone activity use behind the wheel is now common. Among social platforms, Facebook is the most used, with more than a quarter of those polled using the app while driving. About one in seven say they're on Twitter behind the wheel

Wawona Will Host Multicultural Fair
Wawona Middle School will host an on-campus Multicultural Fair from 11 a.m.-3 p.m. Saturday, May 14 to bring the community together and promote cultural awareness. Various community members and organizations will be on hand to present information to attendees. The event will also feature bounce houses, food trucks, the mobile health truck, and cultural presentations.
Edison Debaters are Valley Champions
Edison High School seniors Samira Abed and Katie Bordona won a Valley title in Public Forum Debate at Stockdale High School March 4-5 and moved on to the California High School Speech Association's State Championships in April. They were joined by Edison's Kyle Tsutsui.

Entrepreneurship Students Meet with Clients
Students at the Phillip J. Patiño School of Entrepreneurship met with local business owners March 16 to provide updates on projects they have been working on for the companies. The students are working on online marketing plans and web development for the businesses, which include Rezcom, Build with Craig, Fresno Fit, Boxy Brands, Green Rose Productions/Visalia Opera Company, Simply Fab and the Fresno Fire Squad. The internships are offered through Shift3 Technologies, a Bitwise Industries company.

Roosevelt Captures Virtual Enterprise Awards
Roosevelt High School Virtual Enterprise team's Every Drop Counts won first place for Sustainable Business Plan and an award of $1,000 at the Virtual Enterprise International competition March 6. They competed against 50 other schools from California, Illinois, New York and Oregon. Roosevelt "Rang the Bell" for the team on March 14, celebrating academics. The team also received sixth place for WOW Factor for Best Booth Design and Salesmanship, eighth place for Logo Design, and an honorable mention for Video Commercial (out of 90 schools).

In January, they took first place for Business Card Design, third place for Best Professional Booth, and third place for Video Commercial, competing against more than 100 schools from all over the U.S. Virtual Enterprise teacher Linda Jean Voth said the school's team of 16 students that went to the competition was "the most professional and best behaved of any school."

Vinland Student Groups Spotlighting the Positive
Students at Vinland Elementary School have created clubs to make the school better. The Giving Tree Group passes out positive notes, pictures and treats to adults at the school every week. The Finding Awesome Group highlights one person -- student or adult -- at the school each week. The honoree is interviewed about how they are making the school a better place and their story is read during announcements. Their photo and quotes hang on the cafeteria wall.

Norseman Elementary Deaf and Hard of Hearing Students Perform
Norseman Elementary School's deaf and hard of hearing students provided a special performance in sign language based on "Once Upon a Time," a story of the Three Little Pigs from the wolf's perspective. The annual play, in its 39th year, is a much anticipated event for students and parents alike. Norseman's deaf and hard of hearing department writes, produces, and directs the play.

Danay visited Gaston on March 18 to talk with students about her campaign. Students had the opportunity to sign the "Gaston Supports the Fight Against Illiteracy" banner. The students' help will also support the school's efforts to encourage all students to do well on the Degree of Reading Power test, which they will take after the spring break.