Athletes traded jerseys for jackets on the red carpet on The Rooftop at Pier 17 at the Seaport.
OTRC
By Sandy Kenyon 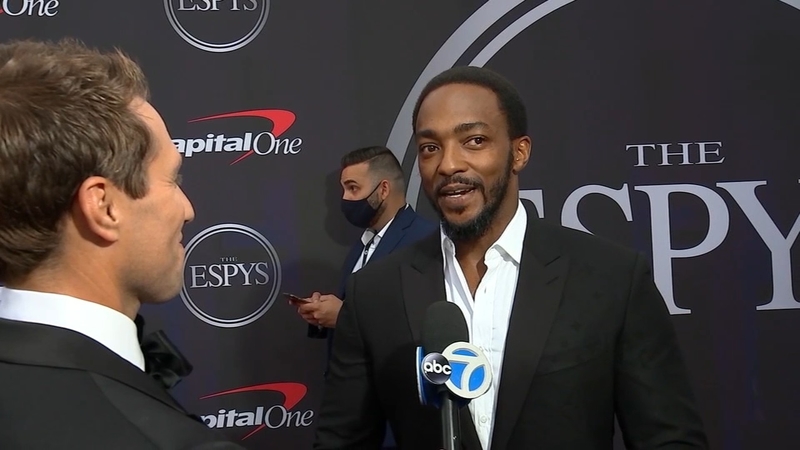 ESPYs return to NYC for first time since 1999

NEW YORK -- The ESPYS returned to New York Saturday for the first time since 1999!

The award show, with initials that stand for "Excellence in Sports Performance Yearly," honored the year's top athletes and sports moments.

Athletes traded jerseys for jackets on the red carpet on The Rooftop at Pier 17 at the Seaport.

Naomi Osaka returned to the spotlight for the first time since withdrawing from the French Open in May and skipping Wimbledon, posing on the red carpet at The ESPYS on Saturday night.

The world's highest-paid female athlete faced a slew of photographers in New York, with one being heard urging her, "Nice smile" as cameras clicked furiously. Osaka offered a faint closed-mouth smile in response.

Osaka won trophies as the best athlete in women's sports and best women's tennis player at the annual show honoring the year's top athletes and sports moments. It was moved to New York from Los Angeles this year because of the coronavirus pandemic.

Tom Brady won best men's athlete and his Tampa Bay Buccaneers were named best team. The quarterback, who turns 44 next month, won his seventh Super Bowl title this year in his first season with the Bucs.

Osaka, who has won four Grand Slam titles, pulled out of the French Open before the second round, saying she has "huge waves of anxiety" before speaking to the media and that she has "suffered long bouts of depression." She also sat out Wimbledon. She'll return for the Tokyo Olympics, representing her native Japan.

"They've given so much to this sport, the community, and society as a whole, and their value is undeniable," she said. "I think we should also use this power together to also celebrate Black women. To all the incredible Black women in my life, on my teams, to Breonna Taylor and all the lives lost, and to those names who I have not yet learned but I hope to share, I stand behind you and I'll continue to follow you and follow your lead and fight for you guys."

Actor Anthony Mackie hosted the show from The Rooftop at Pier 17 at the Seaport. He singled out Scripps National Spelling Bee winner Zaila Avant-garde during his monologue. The 14-year-old from Louisiana is a basketball prodigy.


"This kid can do anything," Mackie said. "She can hit a stepback like Luka Donic and then spell Luka Donic right the first time."

Highlights from the ESPYs Red Carpet

Host Anthony Mackie has a preview of Saturday night's ESPY awards from the red carpet.

Former WNBA MVP Maya Moore received the Arthur Ashe Courage Award for her work on criminal justice reform. She was honored on the same day that the late tennis champion would have turned 78.

Moore stepped away from her playing career in 2019 to seek justice for Jonathan Irons, who was serving a 50-year prison sentence after being wrongly convicted of burglary and assault. Irons' conviction was overturned last year and he was freed. The couple later married.

Chris Nikic was honored with the Jimmy V Award for Perseverance. Last year, he became the first person with Down syndrome to finish an Ironman triathlon. Nikic also won best male athlete with a disability.

Anthony Mackie, best known for his roles in Marvel's "The Falcon and the Winter Soldier" and "The Hurt Locker," hosted this year's show.

"To be hosting the ESPYs and be in the room with all of these amazing athletes, it's a huge honor," Mackie told the hosts of "Good Morning America."
His enthusiasm was obvious.

"I'm going to treat them like people treat me," he said. "Like, I'm gonna run through the audience and hit people and kiss Tom Brady and like, it's gonna to be a great time. It's gonna be a great time. I got a bag of baseballs and footballs and baseball bats, and I'm gonna be handing out trinkets for people to autograph for me to take home.

A Brooklyn volunteer baseball coach who went above and beyond for his students during the COVID-19 pandemic has been awarded an honorary ESPY Award for his contributions.