Suspect shot by officer outside Fashion Fair Mall in Fresno 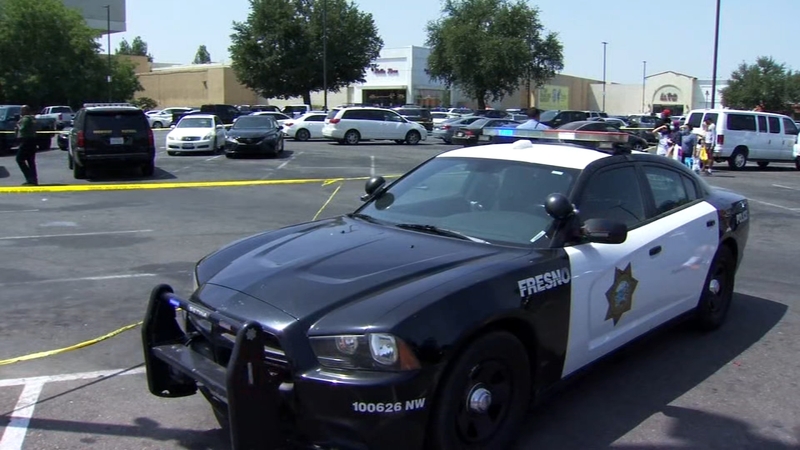 Authorities say it all started with a stolen Range Rover that belonged to Qbal Singh.

He said it was parked in the driveway outside of his family's house and they noticed it missing early this morning.

He says the keys were accidentally left inside.

"Fortunately, we have one of our phones in the car, so we tried to track the phone down and see the vehicle is moving," he said.

The family immediately called 911 while still tracking the vehicle through Find My iPhone.

Members of the Fresno Help Eliminate Auto Theft, or HEAT Team, were also able to start tracking the SUV.

They found it parked at Fashion Fair Mall with the driver and passenger still inside.

Fresno County Sheriff's Deputies and California Highway Patrol officers who are part of the HEAT team started to move in to arrest the two, and that's when shots were fired.

"The vehicle, the driver took evasive actions trying to evade that arrest," says Fresno Police Lt. Bill Dooley. "Those evasive actions included striking other vehicles. Two of the detectives that were on scene felt threatened by these maneuvers, went ahead and shot at the driver to keep from getting injured."

Authorities say the driver was struck by gunfire and immediately stopped.

The driver and passenger, only described as men in their 20s, were taken into custody.

Officials say deputies and officers started treating the suspect for the gunshot wound until the ambulance arrived.

The driver was taken to the hospital in critical condition.

The passenger was taken to the hospital for an unrelated medical condition.

Police say a firearm was found in the stolen vehicle and the investigation is ongoing.

"We are asking the public if anyone happened to be here during the shooting and captured any video, please contact the police department and share those with us," Lt. Dooley said.

The owner of the vehicle says everyone should double-check that their vehicle is locked, saying he's grateful for law enforcement's help.

"Lucky no police officers or anyone was hurt," Singh said. "But I heard there was a shooting there - thanks to the police department for their help."