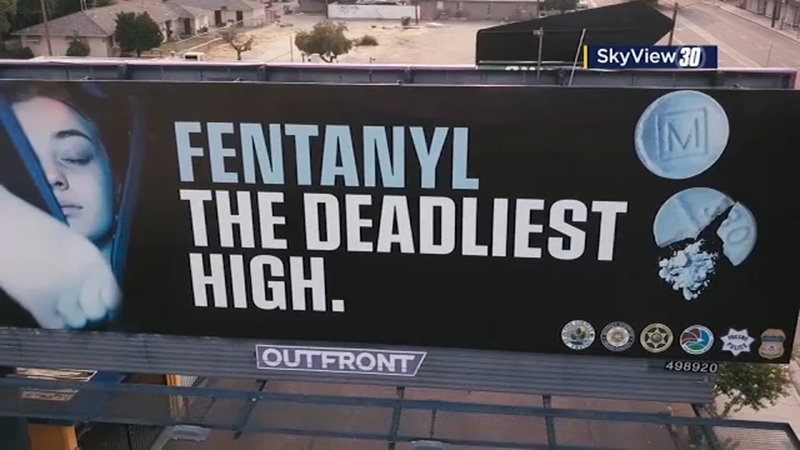 FRESNO, Calif. (KFSN) -- Fresno County and the federal Drug Enforcement Administration are teaming up on a campaign they hope can cut down on fentanyl overdoses.

Drug overdose deaths in the U.S. rose by 30% last year to more than 93,000, driven in large part by record-setting deaths from opioids, including fentanyl.

So this new campaign comes with a sense of urgency.

But it's rare now for the victims to even know they're taking the extremely powerful opioid.

The DEA says it's seized more than 150 pounds of fentanyl in the Central Valley already this year, doubling the amount they found all of last year.

"Most of the fentanyl that we've seen has been produced in China and smuggled through the southwest border," said Benny Ortiz, the assistant special agent-in-charge of the DEA for the Central Valley.

A kilogram of fentanyl costs about $5,000 and can be cut with other drugs to make 500,000 pills posing as Xanax or OxyContin or something else.

Ortiz says one in four of the pills will have a potentially deadly amount of fentanyl.

The DEA and Fresno County invested $220,000 in a six-month campaign to slow the trends.

Twelve billboards warning about the danger of pills and fentanyl will rotate throughout the county, starting at Blackstone & Shaw and McKinley & First.

Three digital signs and 90 posters will also pop up.

When young people are in specific geographical regions including high schools, they'll get targeted messages on social media apps.

"Because that's where our children, adolescents and young adults are spending so much of their time and honestly, so many of them are finding availability to purchase these pills that are laced with fentanyl through these social media apps," said Smittcamp.